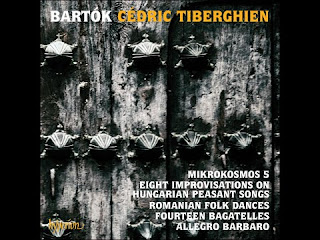 Bela Bartok's solo piano works at their best open up his folk and modern sensibilities in no uncertain terms. Pianist Cedric Tiberghien has embarked on a series of recordings that look at such highlights along with some piano centered chamber gems. The recent volume, which like the others is simply entitled Bartok (Hyperion CDA68133), tackles some of the most memorable and masterful solo works with a zeal and heightened performativity virtually unmatched in the recorded versions I have heard.

Tiberghien choses well for his selections on the program."Romanian Folk Dances," "Fourteen Bagatelles," "Allegro barbaro," "Eight Improvisations on Hungarian peasant songs," and "Mikrokosmos" Book Five are prime Bartokian masterworks that bring out his pioneering folk music research and its adaptation to a modernist perspective along with some of his his more abstracted works.

Tiberghien approaches them all with a highly charged pianistic elan. There is a maximum of the interpretive ethos at play, extreme rubato, a highly creative articulative imagination, all giving us the very familiar, often enough in radically reconceived ways. Those who know most or all of these works likely will feel as if they are hearing the music anew.

We get a very invigorated feeling as we listen. Tiberghien is a genuine phenomena among piano interpreters of the modern repertoire. The recording may startle you if you know the works well. It provides anyone with good ears a pianistic triumph.

Bravo.
Posted by Grego Applegate Edwards at 5:06 AM