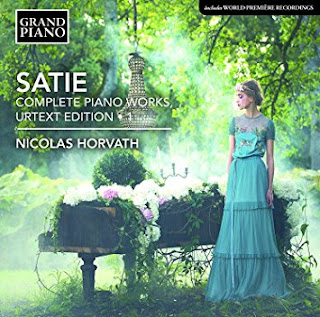 Anyone who for some reason does not know Erik Satie's piano music has been missing out on a singularly wonderful thing. I've listened for so many years to the bulk of it that it has entered my being as something eternally internal to me. I still have the old LPs of the Frank Glazer Vox Box, the Aldo Ciccolini volumes on Angel/EMI, and lately the Jeroen van Veen CD set on Brilliant (see my review here from last October 6, 2016).

And now we have Nicolas Horvath playing Cosima Wagner's 1881 Erard Grand (the make of piano that Satie favored) for Volume One of the Complete Piano Works in the new corrected Salabert Edition of 2016 in its World Premier recording (Grand Piano 761). The Glazer version is the most middle-of-the-road in its clean depiction of the scores, the Ciccolini is the must sparkling and impressionistic version, the van Veen is the more radically iconoclastic of all of them, featuring very slow, sensuously beautiful versions of the lyric masterworks and adventurous readings of the other works.

And so what of Horvath's new set? Of the Volume One? The Erard gives us a sort of pale, brittle vulnerability to the lyric works, most of which are a part of Volume One. We get Gnossiennes, Gymnopedies, Sarabands, the "Sonneries de la Rose Croix" and other gems both very familiar and less so.

Horvath's interpretations are meant to be faithful to Satie's vision and as such they are not spectacularly slow or fast, not extrovertedly dashing so much as concentrated.

The Salabert Edition corrects the numerous errors that crept into the printed versions of the works, some because Satie did not proofread the printed galleys as carefully as he might, and others for whatever reason. I cannot say that my well-accustomed Satie ears perked up and lead me to a pronounced "wow" at any particular point in my listening, but nonetheless it is always a good thing to get the music closer to what Satie intended.

The wealth of lyric pieces combined into the First Volume along with the sterling interpretations make this an excellent place to start for anyone who does not know Satie well. For the cognoscenti this new set promises to be another offering of finely poetic interpretations that completists or enthusiasts will want to have.