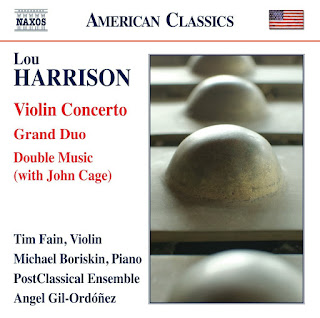 Lou Harrison belongs to that stubborn, iconoclastic Yankee school of last century that began with Ives and Ruggles and continued with Harry Partch, Cage, Henry Cowell, Henry Brant and Harrison himself. Harrison refused tamely to submit to the requirements of "Western" modern classical as defined in his lifetime. He was one of the more dramatically effective and inventive proponents of an "East-Meets-West" eclectic originality.

We hear this all very clearly on a well-realized three-work anthology. Violinist Tim Fain, pianist Michael Boriskin and the PostClassic Ensemble under Angel Gil-Ordonez bring to us a well finessed reading of Violin Concerto, Grand Duo and Double Music (with John Cage) (Naxos 8.559825).

Fain has the right combination of rhapsodic projection and modern sonar facticity. The same might be said in pianistic terms for Michael Boriskin. The PostClassical Ensemble handles the various percussive and chamber requirements of the composer with a bit of dash and aplomb.

These are all nicely representative of Harrison at his finest. The Grand Duo (1988) is perhaps the lesser known of the three works and in some ways it brings us a Harrison slightly more integrated into Western classical tradition. That is, on the surface. Listen to the subtle interweaving of violin and piano parts and you will recognize something of the Harrison world expansiveness. It all takes place though in a more quietly underscored expressive way.

On the other hand the Violin Concerto (1940-1959) uses a percussion chamber group to suggest the more exotic allusions to gamelon and other non-Western music, which the violin in turn takes on with acute extroversion and seamless expressivity.

Harrison and Cage's breakthrough percussion work Double Music (1941) makes a decided break with Western norms to create an analogic new music entranced with and entrancing the non-Western elements that make a clearing and at the same time give momentum to the idea of New Music for percussion ensemble, which at that time was a very new idea. The lines intermix and continually vary within and against themselves. This is a fabulous version that stands out among the many recorded. It is that for its most musical approach, the way every phrase presents itself with great tensile strength and the near ghost of a rubato that applies torque and makes it all "swing," if you'll pardon a borrowed jazz term.

All told the Naxos release brings to us seminal Harrison played with ideal sympathy, creative fervor alternating with expressive quietude. The Naxos price helps make this CD well nigh irresistible.
Posted by Grego Applegate Edwards at 7:22 AM