Music from SEAMUS, Vol. 1, The Society for Electro-Acoustic Music in the United States 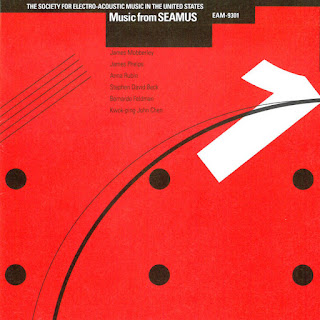 Electro-acoustic music, in its "electronic music" and "musique concrete" incarnations, was one of New Music's most potent and advanced gestures from the '50s through the '70s. There were even best selling albums such as Walter (Wendy) Carlos' Switched on Bach. And then, almost as quickly, Electronic Music went out of fashion for a time, Nevertheless the Millennium and beyond has brought a resurgence. Music from SEAMUS (EAM-9301) documents the electronic pre-Renaissance, in a first volume of works released under the auspices of the Society for Electro-Acoustic Music in the United States. It covers the period between 1980 and 1991, a somewhat dark time for the reception of such music but as we hear on this volume, a time when excellent work was still being produced.

The six compositions on the anthology give us a window on some state-of-the-art developments. Four works feature conventional instruments (and voice in one example) and processed and/or synthesized electric sounds. Two are works for electro-acoustic forces alone.

The stylistic parameters fall rather squarely into a high modernist and beyond sound color and open-form expansive orientation. On the works for instruments and electroacoustics there is a consistent attempt to extend the scope of acoustical instruments with synergies between the two realms. The all-electroacoustic works develop aural landscapes of varying densities.

For your information, the following is a round up of the composers, works and configurations: James Mobberley opens the program with his "Spontaneous Combustion" (1991) for alto saxophone and computer generated accompaniment; it is followed by James Phelps and his "Chordlines" (1991) for computer-generated tape; next up is Anna Rubin and her "Remembering" (1989, rev. 1993) for soprano, piano and tape; then follows Stephen David Beck and "Improvisation on Strange Attractors v1.0b" (1990) for bassoon and Virtual Instrument Paradigm; Bernardo Feldman and his "Still Life" (1986) for tape follows; the concluding work is Kwok-ping John Chen's "Ring Shades" (1990) for solo percussion with two-channel tape.

What we experience on this volume are a series of works that deserve fully a hearing today. They should not bask in the obscurity that has been the fate of much electro-acoustic work towards the end of the twentieth century. Anyone interested in the history of later New Music will find this enlightening. Anyone with open ears will find the hearing of it all pleasureable. Give it a listen, by all means.