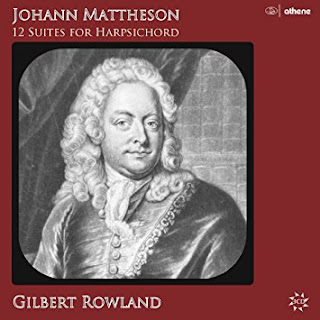 Of masterful baroque composers there are seemingly more than a few who for whatever turn of fate we have nigh well forgotten. Today we have an instructive example in Johann Mattheson (1681-1764). We get a solid look at his music for solo keys in his 1714 opus 12 Suites for Harpsichord (Athene 23301 3-CD set) as spiritedly and authentically realized by Gilbert Rowland.

The liner notes for this release tell us that he lived in Handel's time and indeed was a friend of his. He composed, played organ, wrote, danced, fenced and was multilingual. His friendship with Handel suffered a setback when they fought a duel over Handel's involvement in a performance of Mattheson's opera "Cleopatra." Happily no one was hurt and their friendship resumed.

His operatic career as singer ended when he became the secretary for the English Ambassador in 1705. By 1715 he was Music Director at Hamburg Cathedral. Increasing deafness forced him to give up that position in 1728. He composed numerous choral works during that time, but tragically much of his music has been lost to us during the bombings of WWII. The liners reassure us that the opera "Cleopatra" survives along with a good deal of instrumental works, one of which of course is the "12 Suites" that forms the whole of the current release.

The suites combine homophonic and contrapuntal elements, and are made up of dance music and pure movements that serve to introduce and connect the whole of each suite. In that they were like Handel and Bach's forays into this mode, but also you can hear at times a French element, a similarity to Rameau in the briskly kinetic but lyrical effusions.

The "12 Suites" establish for us Mattheson's idiomatic immersion in the baroque of his time but also a definite originality.

The music comes alive thanks to Gilbert Rowland's apposite and enthusiastic performances. The set will appeal to anyone who revels in baroque harpsichord. Mattheson may be tragically obscure these days but he is undeservedly so. The "Suites" give you many reasons to listen and enjoy. Take the plunge on this one, should you be so inclined. I do not think you will be disappointed. I for one am glad to hear and in the future re-hear these unknown gems!
Posted by Grego Applegate Edwards at 6:09 AM