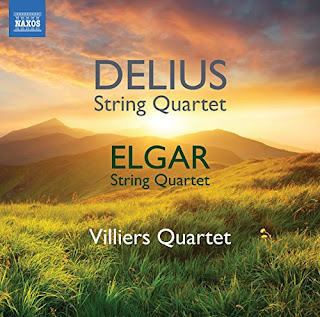 Frederick Delius (1862-1934) and Edward Elgar (1857-1934) were contemporaries and peers, yet on the surface had not much in common save their mutual English roots. Elgar in his own way accentuated the classical-romantic heritage and made of it something personal as well as something English, with a certain Victorian propriety that does not necessarily mar his inventiveness as it serves to frame it as of his time. Delius followed a personal path that veered at times closer to impressionism without sounding derivative. And his music was often enough sensuous in ways that Elgar's work generally was not. In that sense Delius seems less tied to his period, though none of it sounds exactly "modern."

The contrasts are clear yet there is a commonality to be heard as well in their String Quartets (Naxos 8.573586). The Villiers Quartet give us considered and very poised versions of the two works. Both were a product of the disruption and cataclysm of WWI. Delius favors an unremittingly pastoral beauty, Elgar a more robust moving on at least in the outer movements.

The Delius Quartet originally took shape as a three movement work in 1916. He subsequently gave a thorough overhaul and created a four movement version in 1917. For the first time in a recording we can hear the opening and "Swallows" movements in the original form, as reassembled by Daniel Grimley in 2016. They follow the final four-movement version on the CD, giving us a rare chance to see Delius's creative process at work. And there is such visceral, sensuous beauty in the Quartet that a differing reprise of the first part of the work serves to prolong the pleasure of its quiet serenity.

The Elgar Quartet that follows is a notable example of the mature composer on a serious side, which by then was mostly how he proceeded in any case. Perhaps what is surprising about the Quartet is how it goes with the Delius. It has more robust outer movements, but there is a lyrical serenity in the slow movement. There is a more overt romanticist sentiment, surely. But the work as a whole is not entirely alien to a pastoral setting.

It is as if each reacted to the waning World War with a kind of reassertion of what true peace meant to them.

The Villiers Quartet bring out the beauty and transcendence of these two pivotal works. I am left after hearing the recording multiple times with a feeling of deep satisfaction with the rightness of both music and performance. So I recommend it to you without hesitation.