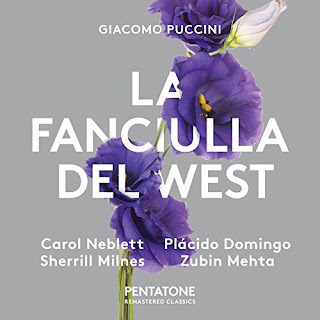 La Fanciulla del West (Pentatone 5186 243), the Wild West opera by Puccini (1858-1924) is something of an oddity, but for all that an endearing one. Commissioned by the Metropolitan Opera in 1910 as a vehicle for tenor giant Caruso, it is not one of Puccini's most popular works (La Boheme, Turandot and Madam Butterfly would qualify for such status, all earlier operas). Yet is in no way inferior from a musical standpoint, and ultimately a bit bizarre. The sight of a bunch of operatic cowboys prancing about in a pronounced Puccinian milieu is slightly jarring. But then, why not? Puccini is himself regardless of the subject matter, and a drama set in the classic American West may be unusual but nonetheless satisfying once one gives it all a chance.

All that is only to affirm that "La Fanciulla" is not an opera entirely within the norms of the late Italian tradition. It demands an excellent performance, surely, in order to affirm its own special blend of subject and operatic style. That is to be had on Pentatone's 2-CD reissue of Mehta conducting the Covent Garden production with Carol Neblett  as Minnie and Placido Domingo as Dick Johnson.

What is perhaps most unusual about the recording is that it was produced in the '70s by Phillips as a quadraphonic release as well as a conventional stereo one. The Super Audio CD enables listeners with compatible equipment to listen to both versions as they were intended to sound on initial release.

I have not tried to listen to the quad version--primarily because I no longer have that option right now. But I do find the stereo version sonically superior and the performance of uniformly appealing dramatic and aesthetic quality. The soloists, chorus and orchestra do a fine job and make an excellent case for the opera.

Puccini enthusiasts will embrace this. Others will find it interesting as a sort of Italy-meets-US-folkways adventure. I am glad to have this version. It is a benchmark standard to me, though I have missed some of the other competing versions as of this juncture. A good bet.
Posted by Grego Applegate Edwards at 6:22 AM