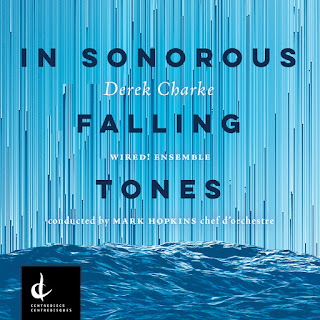 Canadian composer-flautist Derek Charke chimes in with four choice compositions featuring the Wired! Ensemble and the composer as flute soloist. We have in this offering exciting, dynamic modern music of a high caliber.

The first, "In Sonorous Falling Tones" is a concerto for flute and bass flute with much going on and an especially bracing part for the flutes. "Lachrymae" is a not unrelated work for solo piccolo.

"What Do the Birds Think?" follows, a post-Darmstadtian thing of great imagination and beauty for chamber ensemble. The music is abstracted and generated out of the key words "remembrance," "nostalgia," "migration," "birdcalls" and "isolated places." Various moods and mysterious, almost unconscious-unveiling sounds create a world that intrigues and fascinates.

"Warning! Gustnadoes Ahead" closes out the program. It is flute centered at times, based on various environmental sounds as processed and represented in instrumental transformations.

The totality of the four compositions mark Derek Charke as a composer of beautifully crafted importance--and a master flautist of great virtuosity and originality. There is a great deal here to savor.