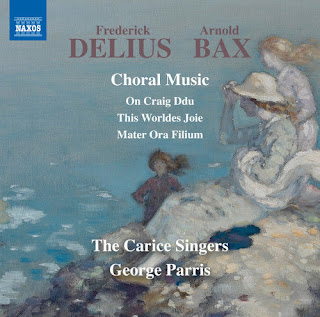 An album collection of Choral Music (Naxos 8.573695) by pre-modernist, sometimes quasi-impressionist English composers Frederick Delius (1862-1934) and Arnold Bax (1883-1953) would first off demand an excellent choral group to make it all shine. We most happily get this with the Carice Singers under George Parris. They are angelic, well balanced and have sopranos that launch the high notes with bell-like clarity and beauty.

They handle the program with impeccable sonority and musicality, bringing out the spirit and letter of the music. There are subtle folk elements buried within these pieces, and often enough a kind of pastoral modern archaicism that only adds to the charm. Both Delius and Bax show a flair for s-a-t-b possibilities.  Most of the music is sung a cappella. The sole exception is Bax's "I Sing of a Maiden that is Makeless," which includes well conceived support from harp, cello and double bass.

There are 11 short Delius works, all atmospheric and enchanting. The earliest works are unabashedly romantic but all benefit from a lyric originality and a sure sense of effective part writing.

Bax is no less appealing with three fairly long songs and two lengthy works in his "Five Greek Folksongs" (1942) and "Mater Ora Filium" (1921).

Perhaps Bax has a slight edge in his harmonic sophistication. Both however show a consummate mastery of the choral idiom and a sort of natural feel for rustic settings and their effective tone-painted realizations.

This one is sheer pleasure. Anyone who likes the Anglo school and/or loves some well sung early contemporary fare will find it all very worthwhile. Recommended!