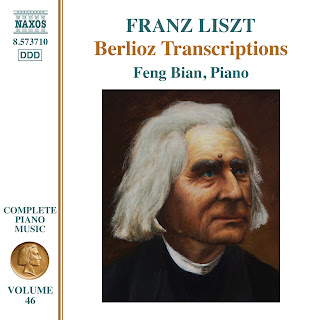 Franz Liszt (1811-1886) was the first genuinely Promethean piano virtuoso. He brought a giganticism, an orchestral presence to the solo piano which in turn was made possible by the advancement in manufacture that gave the modern grand piano a brilliance and a louder, wider dynamic range than it previously had. Liszt created a body of piano literature that suited his concert and salon needs and also did a series of piano transcriptions of celebrated orchestral works of his day, opera chestnuts, Bach organ music and what have you. The orchestral transcriptions made obvious to what might have been otherwise an audience that did not understand: the Liszt and the modern grand could reproduce in pianistic terms what some of the 19th century composers from Beethoven onwards were doing for the fully evolved concert orchestra.

Berlioz and then Wagner expanded the scope and radicalized the romantic symphony orchestra while Liszt was doing the same for the piano. It was only natural that he would embark on a series of piano transcriptions of both. In today's volume we hear his Berlioz Transcriptions (Naxos 8.573710). It is a somewhat judicious assortment of the well-known: the "Dance des Sylphes de la Damnation de Faust," and several chestnuts extracted from "Sinfonie Fantastique" (the "March au supplice" and "L'idee fixe" theme); and the somewhat lesser known: the "Ouverture des Francs-Juges."

All of it is as well configured and as well played by pianist Feng Bian as one might hope.

This one is serious and also lots of fun! Berlioz is transformed and much good it does him.
Posted by Grego Applegate Edwards at 12:33 PM