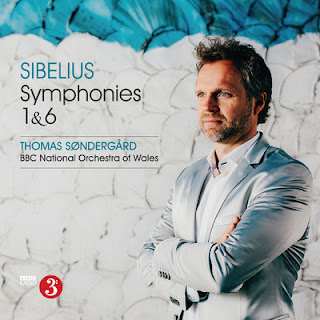 For some reason, in my first decade of listening to modern classical music, a teen in a rapidly changing world, I thought I was too cool to check out Sibelius. High Modernism was king in my formative years and I was so busy catching on to it that I did not consider so much many of the less abashedly "modern" contemporaries that of course in the main I now gladly treasure. By the time I was at NYU, a professor who gave me much to  think about suggested in one of the non-curricular get togethers that I should take Sibelius seriously. He was right, and so I fell under the spell of Finland's greatest composer rapidly and never went back.

As is always the case, one can get very subtle or very different interpretations of symphonic works by opening up to performances other than the one you have first grown accustomed to. And so appropriately there is a new recording of Sibelius' Symphonies 1 & 6 (Linn Records) by Thomas Sondergard and the BBC National Orchestra of Wales.

Perhaps the most welcome surprise of this release is the majestic interpretation of Sibelius' First. A fair number of versions I have heard over time. This one gives us all the ice and passion of Sibelius-as-Sibelius. It sounds less like Tchaikovsky and his "Pathetique" so much as Sibelius and his First. Not of course that Tchaikovsky was not an important influence at that point. Influence is one thing, though, and imitation quite another. Sondergard and the BBC Orchestra make the strongest case for the original strain as I have heard. And in so doing they remind us that the First is a major work in the end, not so much a pre-emptory clearing of the symphonic throat.

The Sixth is well handled, too. If it dances and bounces its way into our listening minds a bit more than other more gravitas versions, it is no less serious a treatment. If an old Colin Davis version remains to me the benchmark for this mature Sibelius triumph, it is only by a slight degree, for Sondergard has a convincing vision of the Master's music that rings true.

So this would form a great introduction to the symphonic Sibelius if for some reason you have not gotten to him yet, and it is a worthy set of new interpretations for old friends of this music, especially the triumphant reading of the First. Listen on!
Posted by Grego Applegate Edwards at 6:42 AM