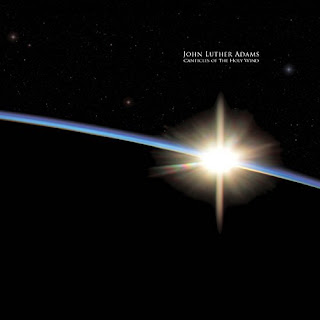 By now it is clear that John Luther Adams has created a body of work that represents a pinnacle of development in the post-minimalist tonal ambient realm today. His music consistently gives off a sort of poetic glow that evidences his extraordinary sensitivity and brilliance. He knows what he wants to hear and what that is seems very right.

The latest, a long, mostly a capella choral work that features the remarkable vocal group the Crossing under Donald Nally, is by no means an exception to this trend. Far from it. Canticles of the Holy Wind  (Cantaloupe 21131) delivers a paen to hope, for the resurgence of humanity through her-his place in the natural cosmos of earth and universe. Things on earth have become pretty grim, he is saying, but our ultimate destiny is beyond where we are. The music represents that place we can and should occupy in the creation as it were, as perhaps an integral part rather that an adversary.

Adams makes full us of the sonority of the Crossing, with long sustains, chordal drones, multipart cosmic counterpoint and rhythmic acrobatics by various sections at various times. The latter is underscored by the subtle percussion of Amy Garapic. There is continual movement and growth. And amidst the mostly diatonic beauty and chromatically expansive descending figures, there is a sort of musical narrative that signifies in tones what one might not say easily in words.

The sectional logic has dimensionality and forward thrust. We never feel the lack of change yet all relates organically each to the other.

It is a universe that centers around what voices can give us when imagination and timbral care have an important place for composer and performers alike.

This may not be an absolute John Luther Adams masterpiece, but it is very absorbing and beautiful music that will put the serious listener in a special musical world as very few other composers today can do.