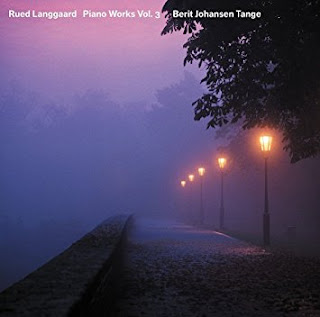 The music of Danish composer Rued Langaard (1893-1952) has gradually been gaining more notice here in the States. Primarily this has been taking place as some worthwhile modern recordings have become available. A series of his Piano Works is a good case in point. I am currently in possession of the Volume 3 (DaCapo 6.220631), as played with distinction by pianist Bent Johansen Tange.

Although I have not yet had the pleasure of hearing the earlier volumes, this one gives us a worthwhile selection of works, three in first recordings. Covered are a spectrum of some seven pieces written over a substantial time period between a youthful 1917 and the fullest maturity of the mid-late-'40s. There is not surprisingly a growth to be traced from a Nordic romantic-lyric stance to more radically chromatic effusions, but most always a sprinkling of tonal memorability. As the liner notes make clear, Langgaard starts with a musical vision more than a formal sequencing.

These are pieces written not so much for immediate performances (many were not in fact performed publicly until after his death) as for the sake of a personal expressive outlet. And so the music has a kind of inner deepness more than an audience pleasing demeanor. There is often enough a virtuoso component and a very personal originality. They are sometimes modernistic in tenor, yet they also have a kind of personal determination that is heedless of the prevailing trends, and that can in fact be quite endearing to hear.

Anyone who seeks the more involved expressive possibilities of the modern period solo piano literature will I believe find in this volume a good deal to like. The performances are near-spectacular and Langaard's pianistic poeticism is not quite like any other.