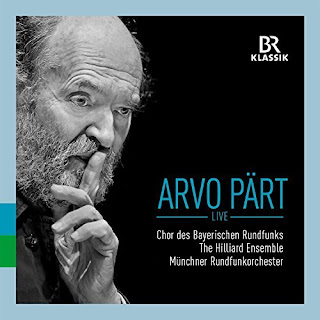 The Estonian Arvo Part has the distinction of being one of the handful of living composers who is most influential and celebrated throughout the world. If you by chance do not know his music, today's CD would be an excellent place to start. And at any rate it is doubtless an excellent place to aurally dwell  whether you are a devoted follower or a newcomer to his music.

The performances are culled from various concerts recorded between 2000 and 2011. The selected works covered on the CD are well matched and not entirely what you might expect.

What is most unexpected and welcome is the opening orchestral "Collage Uber B-A-C-H" from his earlier period. There is unabashed modernism to be heard, yet there is no mistaking the Partian sensitivity to time and place that continually marks his ongoing originality. Here the music is based on the B-A-C-H motive but also a transformation of a Saraband from Bach's "English Suite."

Part's period of crisis from 1968-1976  ultimately gave rise to the special "old-in-the-new" style we hear so effectively and performatively in the works that follow on this program. We are treated to competitively enchanting versions of "Sieben Magnificat-Antiphonen" for a capella choir, "Cecilia, vergine romana" for choir and orchestra, "Cantus in Memory of Benjamin Britten" for string orchestra and bells, and "Litany - Prayers of St John Chrysostom for Each Hour of the Day and Night" for soloists, choir and orchestra.

These works provide the key in microcosm to all that has given us pause and wonder in the special spirituality that is the mature Part for us.

This is a fine collection that everyone should probably hear. Certainly anyone who follows new music today needs to know Part, but then anyone of a general classical bent should also, and, why not, just everyone out there who loves music as well. Confirmed Part appreciators will find in this anthology many reasons to own it, even if you already have versions of some of these works,

A triumphant offering! Listen.
Posted by Grego Applegate Edwards at 6:12 AM