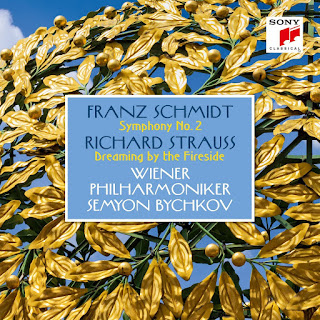 Franz Schmidt (1874-1939) and his Symphony No. 2 (Sony Classic 88985355522) have been victims of vicious critical attacks since Schmidt wrote the work in 1913. Yet it (the symphony) tends to be subject to some attention via performances and recordings to this day. Perhaps not nearly enough?

Wikipedia calls the score reminiscent of Strauss and Reger with some of the heroic largess of Bruckner, and my ears hear that but to the point more of an originality in the late-romantic realm in which Schmidt worked.

The new recording I have been hearing, with Semyon Bychkov conducting the Vienna Philharmonic, does much to make a case for its heroic complexities. This is a late-romantic Austro-Hungarian work that when well played as it is on the new recording comes very much into being with lyric tenderness and power (and I hear as much Mahler's influence as the others but Schmidt is here very much Schmidt). This has been described as a kind of pastoral symphony. I can hear that.

An added bonus is Richard Strauss's short orchestral interlude from his not often performed opera Intermezzo, "Dreaming By the Fireside." It is a worthwhile tidbit and serves to remind us how Schmidt is another thing apart from Strauss. If nothing else you hear a much different harmonic palette, even if both have a large and lush orchestral carpeting in common. The variational aspect of the inner movement of Schmidt's Second is of a very different nature than the tone-poem sequentiality of Strauss.

So what we have s a very stimulating and rewarding program. The care with which Schmidt is elaborated marks this as an extraordinarily fine version, a very best, and gloriously sound staged in ways we scarcely hope could be bettered. Kudos!

Posted by Grego Applegate Edwards at 7:15 AM