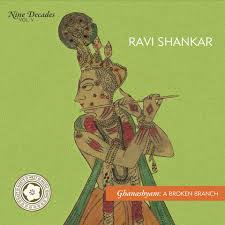 Anyone who has appreciated Ravi Shankar in some depth knows that he was not only one of India's premiere sitarists. He was also a talented composer who innovated within classic Indian and Western-oriented forms, calling upon large ensembles of classic Indian instruments in combination often enough with Western instruments, as well as the classic Western orchestra in a series of movie soundtracks and other projects. This was a logical outgrowth of his initial involvement with the Uday Shankar Troupe in his youth. That institution featured Indian instruments and vocalists in elaborately arranged ensembles.

Of the many recorded examples of Ravi Shankar's compositional-ensemble music, Ghanashyam: A Broken Branch was one that for some reason I missed on its first release in the early 1990's. The good news is that the complete version has now been issued-reissued (East Meets West 1017). It includes for the first time the complete musical score with some 20 additional minutes added that were not initially included in the first release. It forms Vol. 5 of East Meets West "Nine Decades" series devoted to the Master's musical life.

The theater piece was originally commissioned by the Birmingham Touring Opera Company and premiered in 1989. The theme centers around the tragic results of chronic drug abuse via the story of a talented Indian dancer and his ultimate descent into delusion and death.

As is often enough the case in Ravi's mature compositional stance, both Northern (Hindustani) and Southern (Carnatic) instruments and traditions combine freely as do in this case dance styles of both regions.

The music deftly combines instruments and vocals in a multi-movement scenario that follows the joyful moments and gradual decline into infernal realms with great artistry and beauty.

It ranks up there, in my opinion, with the Master's best compositional suites. It shows a darker side to his music (necessitated by the plot of course) and a bold contrast between spiritual heights and infernal lows like no other Shankar work.

Needless to say I strongly recommend the issue to all Shankar devotees but also anyone seeking to better understand the compositional side of modern Indian classical music.

Posted by Grego Applegate Edwards at 6:19 AM