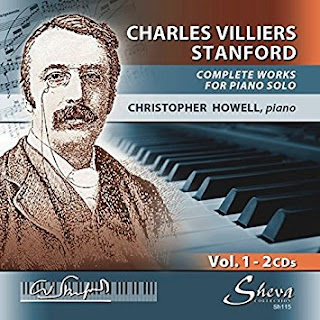 The world of Charles Villiers Stanford (1857-1924) I'll admit is not very familiar to me. He was as big a name composer in his day in Great Britain as virtually anyone. Yet his music is not so well known today. I was surprised at a release of his choral music a while ago (type his name in the search box) and favorably reviewed it. His music was much more engaging than I had imagined it would be.

And now we get to hear his Complete Works for Piano in the 2-CD first installment, Vol. 1 (Sheva Collection 115) as aptly performed by Christopher Howell. There is plenty to like on the first go-round. We are exposed to "Six Waltzes," "Three Waltzes," "Six Characteristic Pieces," "Five Caprices," two sets of "Six Sketches," "Three Fancies," "Five Irish Folk-tunes," and "Twenty-Four Preludes in all the keys." A number of the works are in first recordings.

These are well-constructed pieces, surprisingly post-romantic. They eschew virtuoso technique and flashiness, ending up something like a British Chabrier, with the emphasis on invention and straightforward directness. These are not works of a modernist sort, of course. But they do precurse composers like Vaughan-Williams and Holst. They are not stuffy nor typically Victorian. He shows a kind of affability and tunefulness I was not at all expecting to hear.

I must say I did not anticipate hearing disarmingly charming music of this kind from Stanford. Anyone who wants a wealth of unpretentious pianistics would do well to hear this, as would any Anglophile. It is very much a pleasure to hear. I will be covering Vols. Two and Three in a while, so stay tuned.
Posted by Grego Applegate Edwards at 5:32 AM