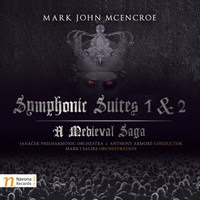 Living Australian composer Mark John McEncroe came to composing relatively late, spending his 20s and 30s as music label manager for EMI Australia and then EMI Sweden. He returned to Australia and began in earnest piano studies, clarinet studies and eventually theory and composition, the latter with Margaret Brandman from 2003 to 2012. He began composing a number of symphonic poems with orchestration help from Mark Salibus, with whom he continues to study.

There is a series of thematically intertwined continuities that serves to unify both suites into a cohesive whole. The two suites musically depict a story of Middle Age political upheaval and its aftermath.

What strikes me most on hearing and rehearing the lengthy two-part work is the way the sprawling unfolding of the score in a consistently minor mode serves to put this music into a kind of timeless world zone. It has a sort of mysterious east-meets-west aura about it. Indeed, its minor ornamental continuity reminds me a little of some of Hovhaness's more Armenian tinged works, only with less focus on a specific region or time and perhaps more of an alternate contemporary-in-archaic mode that straddles a wider set of allusions.

One is left with a singular impression of a kind of organicized stylistic unity and flow that places the music outside of time yet also anchors itself fully in a post-modern kind of present. It transcends a typical pomo vision by unfolding more according to modal-flowing, flowering lines that allude to early music melodic expression without actually quoting or directly assimilating it.

I am left with an impression of something complete unto itself yet rather thoroughly outside contemporary modern music currents. It virtually stands apart from any modern mainstream realms yet in the end reflects our times as through a lens into the past.

Something entirely different, this is. Any adventurous soul may well readily take to this music as I have. Happily recommended.

.
Posted by Grego Applegate Edwards at 6:16 AM