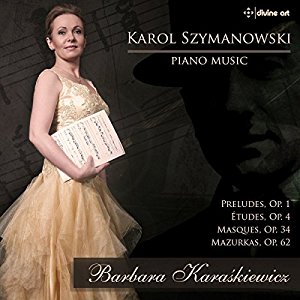 Arthur Rubenstein did more to introduce Western audiences to the piano music of Poland's brilliant composer Karol Szymanowski (1882-1937) than anyone alive in the 20th century. If today his music is not as frequently performed as it might be, the masterful quality and expressivity of the oeuvre as a whole demands a serious immersion in the best of it if we are to understand the 20th century musical strengths and poetics of Eastern European classical-modernism.

Barbara Karaskiewicz combines virtuosity and interpretive acuity to be a near ideal exponent of a series of breathtaking Szymanowski works in her volume of his Piano Music (Divine Art 25151) that has recently become available.

What makes this album especially attractive is its intelligent mix of early and later works. The "Nine Preludes, Op. 1" and the "Four Etudes, Op. 4" are followed by the later "Masques, Op. 34" and the "Two Mazurkas, Op. 62."

The earlier music has something of the late romantic virtuoso brilliance that so overtook the musical sensibilities of 19th century piano music via Chopin and Liszt. Even then though the Szymanowski "Preludes" and "Etudes" included here have a distinctively original individuality and a zeitgeist reflecting the winds of change blowing transformatively over Europe and the music of the era.

By the time the composer completed his "Masques, Op. 34" and his "Two Mazurkas, Op. 62" there is a distinct movement toward a 20th century modernism conjoined with his ever-prevailing rhapsodistic and poetic demeanor.

The early and later phases of Szymanowski's piano music as we hear them on this album are not a matter of  a contrast between tentative student works and mature mastery. There is a stylistic shift to be followed, surely, but the whole of this music shows a full command over pianistic resources and an highly inventive originality that sings out from first to last.

Ms. Karaskiewicz puts a sense of clarity and passion into each movement, a genuinely sympathetic lyrical and dramatic touch that is so needed for a vital interpretation of this most expressive composer.

The end result is a very happy meeting of pianist and composer. I would be hard-pressed to imagine a better single CD that brings to us all that makes Szymanowski's piano music important and movingly alive. Here is a great place to start if you want to know why the composer is a central figure in the Polish early modern period. The selection and performances are equally rewarding to one who already knows something of the music. Barbara Karaskiewicz puts it all before us in glowing terms. Do not hesitate to grab a copy of this album!