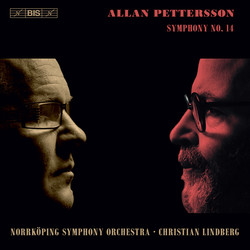 There is nothing comparable in the modern new music literature to the later music of composer Allan Pettersson (1911-1980).. Like his compatriot Ingmar Bergman, he had a rather somber, even gloomy vision of the expressive arts, being the symphonic counterpart to Bergman's films in spirit. Pettersson himself draws the analogy in "The Song of Life." More on that (the video) in a minute.

As I've argued for some time, we allow and even embrace the darkness of mood of filmmakers (horror, Bergman), playwrights (tragedies...what could be darker than Sophocles' "Oedipus Rex?") and visual artists ("Guernica") where we have less tolerance for such things in music.Why?  Pettersson's later symphonic music has come under some fire over the years because it expresses undoubtedly in musical terms his frame of mind during his protracted period of suffering from a very painful illness. Some say it is self-indulgent. What is indulgence if not self expression, an aesthetic aim he had in common with all the "greats"? And it is noble and greatly dramatic music!

The Symphony No. 14 was one of the very last works, completed in 1978 (along with his 15th and the Violin Concerto). As such it is a culmination of his later style, a sprawling, single-movement work that stands at times at the very edge of tonality with chromatic melody lines that stretch endlessly forward and have some relationship to his ongoing pain and frame of mind of his last years. Yet if we did not know that, the music would still give us pause and speak to us eloquently.

So we have a recent recording of the 14th (BIS 2230 SACD) in the remarkable series of Pettersson's Symphonies by the Norkkoping Symphony under Christian Lindberg. The SACD sound quality is excellent, as is the performance. And the 14th is quite the seminal work, encompassing everything that late Pettersson was all about. It is most definitely not chipper fare, yet there is transcendance. All the suffering undergoes transformation by the very nature of the symphonic medium. The orchestra is large, the music beautifully unrelenting.

Is this akin to Bruckner in hell? Not exactly. The expansive sound has something far beyond Bruckner, yet has a hugeness, an epic grandeur not dissimilar. Pettersson's scoring for flutes, French horn, and above all the strings has a heroic quality and often enough seems central to his expressionist project. Think of Bruckner's scoring of the horns over a thick carpet of strings and you might find it enlightening.

Pettersson is one of the 20th century's most enigmatic composers, which is saying a great deal since enigma is an important part of the modernist project at times. He is irreducible to the modernism of his era, yet decidedly a parallel to "mainstream avant garde" music as represented by others in the later part of the century.

The 14th and its performance here is definitive Pettersson, an ideal point of departure if you do not know his music, and an affirmation for those that do. A wonderful bonus is the DVD included in the release--the very informing and moving video "The Song of Life," a lengthy series of conversational interviews with the composer from 1973-80. It is essential watching.

So take a plunge with this one if you can. Excellent in very many ways!