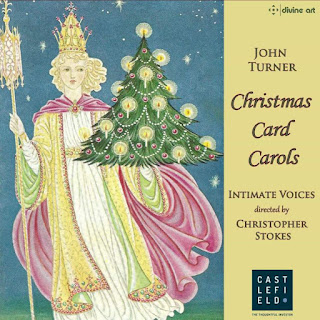 If you are a music devotee like I am, the Christmas (Holiday) Season has its ups and downs. If you think about it, there are maybe 30 carols and songs that get recycled every year in all sorts of ways. And now in the States from before Black Friday on there are increasing numbers of TV commercials that make use of the music in annoying or less annoying ways. Regardless, the sheer repetition of any number of them might start to give you brain hemorrhages or other states that have nothing to do with visions of sugar plums. Admittedly there are many songs I can hear year after year in the right versions, but over time I also have welcomed new fare, such as holiday oriented jazz, folk songs, music from other national traditions, repertoire from the Middle Ages and the entire catalog of Christmas classical possibilities.

So in that way I welcomed in the mail recently something totally new, namely John Turner's Christmas Card Carols (Divine Art 25161). Most happily it features the strikingly sonorous vocal ensemble Intimate Voices under Christopher Stokes. They sound positively angelic here.

The premise for John Turner was to compose some 23 new carols, essentially based on familiar texts, some going back centuries. So for example we get an altogether different musical treatment of "Away in a Manger," new yet somehow fittingly related in overall melodic thrust.

The music has a bit of contemporary harmonic spice to liven up our holiday listening punch. Yet what hits me is that the music remains strikingly in the carol tradition, sophisticated choral songs that supplement the usual diet of chestnuts (on the open fire or cracked) with well written and tuneful works that do not relate to the many popular songs that have entered the pantheon in the last 100 years. Instead these are timeless, a kind of alternate to the 400 years of Christmas season gems, as if in some parallel December season on another unknown continent a group of Euro-American-based settlers there grew another body of traditional songs.

It is welcome addition, a rich broadening of available carols, written today but with pronounced early-music-and-beyond glow suffusing the whole. The caveat to all this is that you the listener cannot casually throw this on the player and expect instant recognition. This is New Music and so you are expected to spend some time and get to know it all. It takes a little, quite pleasant work to put this music into your holiday listening block. Once you give the album a few preliminary auditions, the music will I hope seem to fit in nicely as a refreshing alternative to 50 versions of "Jingle Bells" and "Silent Night."

Anyone of Classical choral bent will find this album refreshing and substantial. And until this music becomes part of the commercial onslaught of would-be advert jingles it is yours and yours alone to hear when you choose. It will be a while before Wal-Mart starts piping this music into their stores, if ever.

Warmly recommended as a beautifully performed set of brand new yet ageless carols! Give it your ears if it sounds like something you would get wrapped up in like a surprise gift under the tree. Your listening mind will be a new present to yourself!
Posted by Grego Applegate Edwards at 7:13 AM