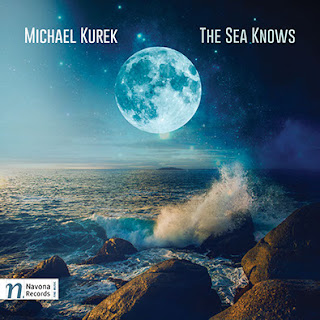 Anyone who loves the harp no doubt knows and loves its use in modern Impressionist classics, where it can create an ambiance that we continue to embrace. Living composer Michael Kubek has absorbed that sound and made of it something contemporary-tonal on his CD The Sea Knows (Navona 6111).

A collection of five Kurek works, the album includes harp on three of the five. It is not the primary focus of the music per se, though indeed an ambient beauty and liquidity associated with the harp is an ongoing feature of the program throughout.

Ever lyrical without precisely straying into the blatently Neo-Romantic, Kurek gives to us five evocative works, each varying the mood in part by contrasting instrumentation and in part by thematic rhapsodic variational thrust.

There is a descriptive plasticity to the three chamber works centered around the harp, played nicely by Rita Costanzi or Soledad Yaya. "Moon Canticle" for harp alone implies a night sky in its affective presence. "Serenade for Violincello and Harp" and "Sonata for Viola and Harp" flesh out the ambiance with longer formed pensive lyricism.

"Savannah Shadows" for violin, viola and cello concentrated on string sonance for extended moodiness. The title work "The Sea Knows" caps off the program with an ambitious and somewhat more spicey rhapsodism for a full string orchestra (Vanderbilt Strings under Robin Fountain) and solo cello (Ovidu Marinescu, who also is on the Serenade). It is here we can especially hear Kurek's professed affinity with Rachmaninoff, Sibelius, Vaughan WIlliams and the like without detecting any imitation per se.

In all this is an descriptively ambient program that is modern in its overall thrust, yet affectively tonal in its vocabulary and eloquence. It will please a larger audience, perhaps, than one might ordinarily be attracted to New Music, yet it is involved and musical enough to keep the more demanding listener satisfied. Bravo.