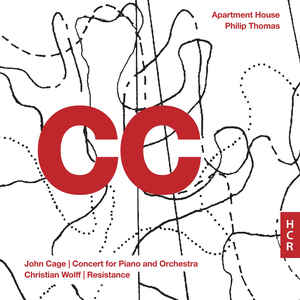 On today's 2-CD set CC (NMC  HCR16CD) we get fine interpretations of two important American New Music High Modern works, one a mainstay classic, the other something brand new. Both are for chamber orchestra, performed with dynamic grace by the ensemble Apartment House and piano soloist Phillip Thomas. The works fill a CD each and consist of John Cage's iconic "Concert for Piano and Orchestra" (1957-58) plus Christian Wolff's "Resistance" (2017) in its world premiere recording.

The "Concert for Piano and Orchestra" performance presented here is one of the very finest, rivaling the 1972 recording by Ensemble Negativa released in Germany as part of the now quite obscure LP set Music Before Revolution.

The current version takes up a full 53 grand minutes. It has been built from 84 separate "notations," various sets of codes and instructions for specific aural soundings in the "Solo for Piano" part, intended to be performed alongside of the separate orchestral parts, each a kind of solo performance which then in amalgam becomes the work as a whole. It exemplifies and embodies indetermination in the choice of musical texts, the enjoinment of each player to chose texts or abandon them at will, and the "clock hands" of the conductor, which speed up or slow down the progression of the music at the conductor's aesthetically spontaneous whim. The texts chosen for this particular performance differ from previous versions in that there is a combination of previously used notations and new reconstructions as well.

So this performance is in effect one-of-a-kind, as every one is designed to be. The result in the right hands is a landscape of synchronies and dis-synchronies, sound punctuations out of silences for 14 instruments plus piano soloist. Apartment House comes through with a beautifully creative sound-sculpture-in-motion. It is a superb reading. I react like I did for the Ensemble Negativa version when I first heard it, with the idea now firmly held in my head that "John Cage doesn't have to sound like s--t!" Indeed it sounds like what happens when musically sensitive instrumentalists are let loose and allowed to commune with the structural demands of wisely aleatoric Cage.

The new Christian Wolff work that comprises CD2, "Resistance," sounds quite different as it was meant to. The work was commissioned by Apartment House for performance alongside Cage's "Concert." The instrumentation used here is the same as for the Cage, though the composer allows for a greater sized ensemble according to various specifications. Keeping to the same ensemble size helps us compare the two works directly and makes them each fully a part of the set. The piano part is a constant and like Cage, Wolff juxtaposes variously notated and aleatorically variable texts. The sound is denser, perhaps slightly less abstract, and filled with intersections and running contemporary phrasings that are less dryly monumental than the Cage. In any case the musical results cohere and sound well as an exciting New Music excursion.

Taken as a whole or considered separately, both of these performances and the musical instructions and specifications that make them possible become very much high modernism at its finest and most intriguingly open. The Cage is a masterpiece of its time and Apartment House do it benchmark justice. The Wolff most certainly seems like a masterpiece-in-the making.

Anyone who already embraces high modernism encounters an essential, indispensable release here. Anyone who wishes to take the plunge into the new sounds maelstrom might well start with this! Do not hold back. Get it!
Posted by Grego Applegate Edwards at 6:44 AM