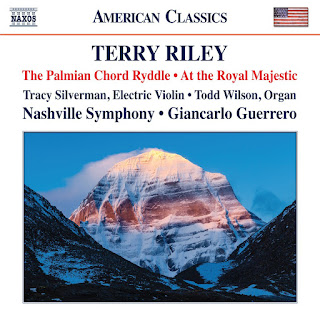 Of all the so-called minimalist giants of the music, Terry Riley by now perhaps has strayed the furthest from the trance-repetition he had so much to do with establishing on his celebrated "In C." With this new recording (Naxos 8.559739) of two works from 2011 and 2013, respectively, a "new" Riley emerges definitively, though one might argue (correctly, in my view) that it has been there for a long time.

None of that should deter us from the music on this new CD, which occupies its own space without looking backwards. Each of the two works centers around a soloist in interaction with the orchestra, Tracy Silverman on electric violin for "The Palmian Chord Ryddle," Todd Wilson on organ for "At the Royal Majestic." The works are not so much vehicles for some super-saturated solo virtuosity, though both players are called upon to engage in complexities. The space between soloist and orchestra is more in the nature of a close collaboration, with musical togetherness the aim.

Turning to the works themselves, we hear the essence of Riley in spite of change and evolutions in style. After all, Riley excels at fashioning beautiful lines which intermesh together brightly. That is as much true of the new works as it is of "In C."

Here the lines interrelate but not in some strictly processual sense, they may repeat but then they develop in more symphonic ways than orthodox minimalism posits. And then there can be a glorious sort of anarchy as well.

"The Palmian Chord Riddle" (2011) is in seven short movements, beginning with a classical Indian feel in the long lined beginning but then developing outwards into a fantasia of possibilities where violin and orchestra dialog together expressively and at times in mysterioso fashion. It is after all a riddle, so the work you do to follow the music makes possible your own "solution." It is music that has idyllic mystique and event-a-mental drama and unfolding. The main motif winds its way through the music, reappearing with shifting contexts and continual redevelopment and contrasting counter subjects. It all makes for fascinating and ever more absorbing listens as one gradually grows into the musical flow.

"The Royal Majestic" (2013) has initially an old jazz riffing feel, especially in the organ. It repeats and evolves like a boogie-woogie only in Riley's mischievous and cosmically open hands. It goes outwards like a boogie-Bach projectile launched into space. The three movements take note of, conflate and deconstruct-construct a bluesy sensibility and subject it to all manner of musical clearings, throat clearings, spacious energy custers and even a kind of tip of the hat to old standards jazz. All this has some sort of relation to Foss's final movement to his "Baroque Variations," or I can hear it as a rejoiner, anyway. It may just be the dynamically ubiquitous nature of the organ part amidst wonderful clangor and tumult that jogs my aural memory?

And then there is a further movement outward like a Sufi-esque spinning gyroscope encompassing related pulsars of pentatonicity! A rather wild repartee to the opening work. And a pandora's box of possibilities coming out of the one. It is like Riley has become impatient with the orderly unfolding of something like "In C" and instead allowed the paint box of inspiration to spill and splatter its way into new, unexpected forms coming out of forms. Trust me. Listen carefully, repeatedly.

When the program ends, I have the urge to hear it again. It is like Mona Lisa's enigmatic smile. It is clear what is there but not at all clear that there is some simple, grounded answer to the "riddle." Guerrero, the Nashville Symphony, and soloists Silverman and Wilson do a bang-up job presenting the complex mosaics of the two works, refusing to simplify but instead giving all due weight to what Riley has put before us.

It is like a Zen rock garden--only in time are you aware that each grain of sand within is both similar and yet very different on close inspection. Sameness and difference are thrusting themselves at one another in this new music, in some ways like a super particle collider in slow motion, so that nothing has a simple provenance to anything else. That is delightful to me and I listen again and again to find more that is new and emergent. I do love that feeling of casting adrift and putting yourself in the music's hands. Join with Riley in this journey, too. It holds a solution. It does not matter to what!

Very recommended!
Posted by Grego Applegate Edwards at 7:12 AM