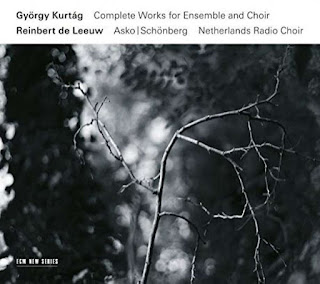 I almost never do something like I am doing here. That is, I never repost an earlier posting without some exceptional reason. It so happens that this recording has been nominated for a Grammy Award for Best Classical Compendium this year. I strongly endorse this set as an exceptional contender. I hope it wins for all the reasons set down below.

I was tangentially a part of a Facebook thread yesterday. Implied was a question: Who listens to New Music these days? One answer is that they are generally the same audience who listens to classical music in general. Often enough that is true in the concert setting, given that a contemporary work may be a part of a program along with older classics. In the matter of those who purchase New Music recordings, it still can apply. However, there also is a group of listeners who respond more exclusively to the new and avant but do not necessarily collect and get into the earlier classical music. They are a smaller group. They may listen to advanced jazz, rock, and/or world more than Bach. This blog caters to both and manages to get a respectable readership out of the two camps. I of course appreciate the patronage.

When it is a matter of today's offering, either group might be well served by the contents. It is an important release from a composer who has gotten attention over the years as a major figure in the New Music, Gyorgy Kurtag.  Today we have a worthwhile compilation of three-CDs: Complete Works for Ensemble and Choir (ECM New Series 2505-07).

It is an all-encompassing collection of compositions by the Hungarian high modernist, nicely recorded and very well performed by soloists, guests, the Asko/Schonberg Ensemble and the Netherlands Radio Choir under the guidance of conductor Reinbert de Leeuw.

The recording of  the numerous works on this set was a labor of love. De Leeuw has performed each of these a number of times in the last twenty years. The master recordings for the set took shape from March 2013 through July 2016. Gyorgy and Marta Kurtag were intimately involved both before and after each session. Their detailed evaluation of each result sometimes led to De Leeuw's re-recording of some of the music, both sections and an entire re-performance as deemed necessary.

The results met the full approval of the Kurtags and so the music stands as a benchmark for performances to come. Only a thorough personal immersion in the recordings make that plain. Kurtag is not a composer easily categorized. The reasons for that are not hard to find. His music covers a wide swath of possibilities, both in a high modernist and near-tonal realm that ever bestirs in new configurations, dramatic ebbs and flows, sheer power or reflective unwindings.

The wealth of works cover a long span between 1959 and 2011. Most fall somewhere in the middle years. Not all include the choir. The ones that do show a natural feel for musico-vocal-instrumental declamation. The purely instrumental works are filled with color and a shifting focus on ongoing event structures.

Some eleven works make up the totality of the program. I come away from the set with a strong attraction to the music and a feeling that we are in the presence of a living master of true importance. A work-by-work breakdown of what is present might have a tedious quality for the lightening engage-and-move-on readership here on the net. There is just too much and because of the original quality of Kurtag's music it would take many paragraphs to do justice to what we get. Instead, I will say that this set underscores the unvarying quality of Kurtag's music, as it sets you on a riveting journey through the thickets, the broad panoramas, the high mountain peaks and peaceful valleys of what makes Kurtag so absorbing and worthwhile.

Spend time with this set and I suspect you will, like I have, get a distinct tingle of satisfaction. Highly recommended.
Posted by Grego Applegate Edwards at 7:21 AM