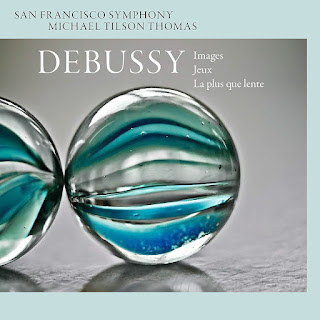 Debussy, I imagine everyone knows who reads this, was a supreme colorist and poet of the symphonic idiom. He demands an equally poetic performance to allow the music to breathe with life. Judging by the release at hand Michael Tilson Thomas and the San Francisco Symphony are up there among the greatest living exponents of such music.

They get a good workout with this disc of Images pour orchestre, Jeux, La plus que lente (SFSmedia SFS069). The 24-bit audio shines with great resolution and projection.

Images is a good a test as any work from the master of light and shade. The liquidity, folk limpidity and folk atmosphere of the music should be brought out without too much passion, with a careful attention to a wholeness that rises out of the ever-shifting orchestration. Thomas and the San Francisco Symphony give their undivided attention and artistry to it all, with the result landing us into magic territory. They do complete justice to the music, which lets us feel each image in broad relief.

Jeux gets faithful attention from its ravishingly mysterious opening to its athletic yet luminous core.

La plus que lente is not quite as often performed as the other works here.  The schmaltz factor is more integral to this short work yet Thomas and company avoid the temptation to indulge too much in the affective element. Just enough.

The pristine audio and superbly balanced reading of this music captures Debussy's considerable atmospheric charm in as faithful a way as I've heard. Anyone hankering for new versions of these works are well served, as are those seeking a very characteristic performances of someone relatively unknown to them. Highly recommended and a pure pleasure to hear.