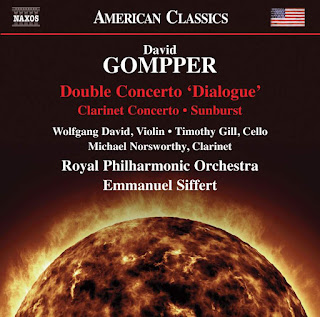 Up for consideration is lyric Modernism by US Boomer (b. 1954) composer David Gompper. It is a disk that covers the Double Concerto "Dialogue" for violin, cello and orchestra (2012-16), Clarinet Concerto (2013-14) and Sunburst (2015) (Naxos 8.559835). The performances are stirring, featuring Wolfgang David on violin and Timothy Gill on cello for the Double Concerto, Michael Norsworthy on clarinet for the Clarinet Concerto, and the Royal Philharmonic Orchestra under Emmanuel Siffert for the whole of it.

This is music that bustles and rustles more than bloops and bleeps, so in the rhythmic stylistic continuity sense has more in common with other American non-Serial Modernists like the "serious" Copland, Harris, (William) Schuman and the like more than Messiaen, Varese, Webern and such. That is not to say that Gompper's rhythmic aims are always straightforward, but nonetheless one takes in the give and take sequentially and intuitively with a forward arching. There are consecutive "ones," often enough regardless of what they add up to! There is pulse, regularity. And that what is not frequently mathematically obvious on the surface, so that gives it an American Modernity, surely.

Melodically-harmonically the music is chromatic and tonal but at times quite expanded into near non-tonal paths. What strikes me listening to it all is orchestrational poignancy, syntactical fluidity and a clear and crisp vision of the soloists's interaction with orchestra that naturally follows the outcropping of Gompper's musical speech-logic. There is more performativity to the whole than virtuosity showcasing going on per se, though the expressive demands made upon the players, rather most strikingly the clarinet,  cannot be ignored nor should they.

The Double Concerto has a very atmospherical, almost mystical cast to it and needs your concentrated attention perhaps more so that the Clarinet Concerto, which rivets your attention more directly with its exciting fireworks. Mr. Norsworthy's clarinet work is remarkable here and the entire work bristles with dazzle, then reflects with a sort of impassioned contemplation.

Both this concerto and the following work Sunburst are based on sketches the composer set out that involved fractions that move in descending order. The latter work especially embodies "the proportional Farey series as plotted on a lattice," which is literally "sunburst" as a replicatable phenomenon? I have no exact idea but it does not matter for the moment.  And it is in the hearing of results that all this takes of structure and converts it to expression as it must be in the performance arts. The work shimmers with magnificence, at times seems to extend from a Petrouchka/Rites nexus orchestralistically, yet so far beyond as to be of this moment and an originality that sets it very much apart.

In the end the music is quite masterful. A world beyond unto itself, glistening and self-creating out of all we up to now have shared as part of the new. It is a High Modernism that does not look backwards as much as forwards, does not seek to create a stridency yet does not rest with the musical-chemical reactions of the simply earlier, for it is part of our "now-later" and in the best ways.

Sunburst caps our program with something impossible to ignore, beautiful to hear, and cumulative in its complex being so that we gain all the more as we repeat the experience.

It is music that asserts itself unflaggingly and originally. Reception is our part of the bargain, and the task must be taken seriously. This Gompper program is worth the effort, surely, but it does take effort to get inside this music. Once you do, you no doubt will feel rewarded as I do. It is music to dwell inside gladly. I recommend this one to your consideration with sincerity and with some conviction.

Posted by Grego Applegate Edwards at 8:03 AM