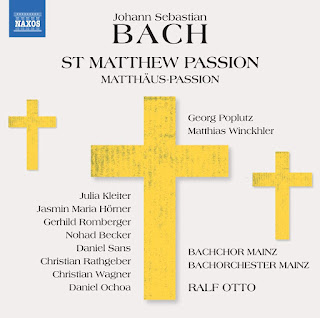 Of all of Bach's vocal-choral extravaganzas, the St Matthew Passion (Naxos 8.574036-38 3-CDs) is to me the very greatest of them all. But then my early history and the work coincided decisively. I frequented by the time I was in eighth grade a farmer's haunt turned junk shop by the name of Sy Van's Feed and Grain right by the Susquehanna Railroad tracks in downtown Butler, in Northern NJ. They had used LPs and 78s for ten cents each. Since I had already come across the Bach Brandenbergs I took notice to find what was a one-LP highlights disk of the St Matthew Passion conducted by Mogens Woldike on Vanguard. It looked playable. Why not? I had no idea about such things, did not even know Handel's Messiah then, but after a few hearings I was convinced I was in some important musical presence. I was.

And here we are now some 52 years later and a number of St. Matthew Passions later I still find the music monumental, and I still have that Woldike LP version. It still plays! And now there is a new version, just in time for the Lenten/Easter season, the complete version on three Naxos CDs by soloists, the Bachchor Mainz and the Bachorchester Mainz, all under the direction of Ralf Otto.

I have a social media buddy that recently complained that the St Matthew is marred by too many recitatives. It is true there are more than perhaps would be ideal, yet they never bother me, especially when balanced by the incredible beauty and fiber of the chorales, the tutti climaxes for choir and orchestra, and the arias with remarkable melodic arcs and unforgettable instrumental interjections? There is nothing quite like this work, though of course Handel's Messiah is the better known of such Baroque choral masterpieces. Nonetheless, there are moments in the St Matthew that soar even higher than Handel at his best, though perhaps it is less obvious in a casual listening situation. But a lifetime after I spent ten cents to enter a fabulously brilliant musical world I am of the same mind as I was when I found the magic in the grooves.

And the good news is that the complete Naxos version by Ralf Otto and the Mainz Bach-ites is very, very good. It may not have every bit of the magic of the Woldike but it has its own charms, too. The soloists leave nothing to be desired, the choir is bright and motivated and the instrumentalists are inspired and impassioned. There is atmosphere to the performances, which any Matthew should have in abundance. It has plenty of it. The recording quality too is excellent.

And for twenty-something bucks you can get this full version, which is of course a very important part of the Naxos attractiveness. Whether you need a full St. Matthew or just want another version to spruce up your listening, this is a good bet. Very recommended.
Posted by Grego Applegate Edwards at 9:39 AM