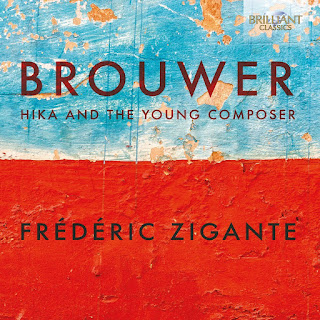 And with that in mind I introduce today's album for you, happy to have it playing as I write this. It is an album of Brouwer compositions for solo guitar.  It is called  Hika and the Young Composer (Brilliant 95838), a program that features the fine performances of guitarist Frederic Zigante.

We get to hear a well selected program of solo guitar miniatures by Brouwer that cover his early period as a composer and then too some works that share in the outlook of the first important works yet came from the pencil of the composer at a somewhat later date.

So we get some wonderful items to savor. There is the title piece "Hiko" (1996) noting the passing of Toru Takemitsu, along with 20 exemplary "Estudios Sencillos" spanning the time period of 1961 to 1984. Some extraordinary miniature staples of his early period round out the program, including the 1959 "Tres Apuntes," "Fuga No. 1" from 1957, two "Elogio de la Danza" from 1964, and lastly the 1956 "Danza caracteristica."

What is so remarkable listening to this program is the richness of vocabulary, the very prime Cuban rooted idiomatic way the guitar is sounded and yet too the unmistakable Modernity of it all. It is hard to imagine a better mix of substance and excitement, to the triumph of heart, mind and fingers over the frustratingly inert "thereness" of the guitar sitting on its stand, waiting for the player to express a dominion, brilliance and imagination. These pieces and their performances mark a triumph of humanity over wood, string and perhaps a bit of ivory or other fast-staying substance. Humanity wins and yet too we cannot help being glad for the guitar, of course! For the guitar wins, too.

It is an excellent album and for the Brilliant price I surely recommend this one to everybody and anybody who wishes to explore Brouwer's  extraordinary rootedness and why the guitar is a wonderful thing in the hands of Frederic Zigante. Hurrah!
Posted by Grego Applegate Edwards at 8:13 AM