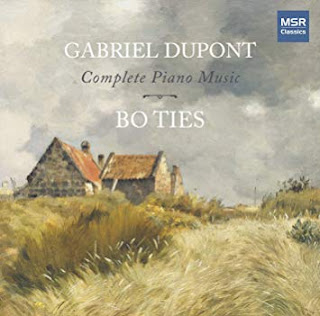 I cannot say that the Complete Piano Music (MSR 1699) of Gabriel Dupont (1878-1914) would have been on my wish list unless I was regularly reviewing the music of our time, albeit stretched backward to earlier days that might not properly be "ours" per se. Perhaps one first notices the shortness of the life span. Died at age 36! That in part explains why he has not become a household word? We spoke of Mendelssohn yesterday though. He made it to 38 and garned plenty of fame so there is no saying. Yet this two-CD set of Dupont, nicely played by pianist Bo Ties, maps out a world of great interest to the devotee of early Modernism. Early death or late, what matters is the music of course.

It is a good deal of music to hear and it is good music. The liners to this disk ask, "Why is it we do not know this composer?" And indeed, why? I have no idea about the rest of his oeuvre, and so I cannot say, but once you listen to this music a few times you do find a great deal to like. Much of the music here is in the form of character pieces, gathered into thematic suites. The whole of disk one is the fourteen-part "Les Heures Dolentes," a rather remarkable thing in itself. CD2 has a ten-part "Le Maison Dans Les Dunes" along with two shorter, less overtly thematic groupings.

What stands out in this music is the lyric charm, the very French proto-Modern atmospherics, at times very much in a pioneeringly Impressionist mode, other times as tumultuously cascading Romanticism slightly closer to the edge than perhaps a Rachmaninoff, which nonetheless at times is less startling, less original to our ears, though of course at the early turn of last century this was daring fare in any event. But it is the atmospheric quasi-Impressionistic pieces that wake us up to the fact that had he lived, he might have been considered up there with Debussy and Ravel and possibly beyond them, who can say? That is moot now for he left us pretty quickly.

What matters is what he composed. It is very pianistic in the very French sense of those times.

The performances are quite nice, the sound is very good. Above all, though, this is music one can and no doubt should come to know via this rewarding two-CD set. I could wax on but instead I will suggest you listen--and discover for yourself what is going on here. Bravo.
Posted by Grego Applegate Edwards at 8:30 AM