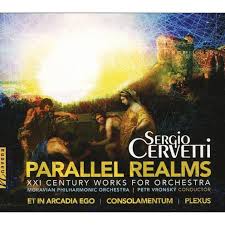 Sergio Cervetti writes orchestral music in the "Grand Tradition" of Modernist Drama, an heir to the great High Modernists that insisted that the old make way for the sometimes radically new, he builds his very own edgy sonic castles in the air. On Parallel Realms, XXI Century Works for Orchestra (Navona 6217). Petr Vronsky and the Moravian Philharmonic Orchestra give us exciting performances of three of his most recent works, namely "Et in Arcadia Ego" (2017), "Consolamentum" (2016) and "Plexus" (1970 Revised 2017).

The kind of sound-architectural fanfare we have heard from Stravinsky's "Rite" or Varese's "Ameriques" is not out of place in thinking of what this music sounds like, yet Cervetti goes very much his own way with the edificial idea and creates his own worlds.

The music is vibrant and essential. It goes some ways in showing us how the legacy of the Early Modernists can still have a foundational importance to composers who have something new to say. Bravo to this one!
Posted by Grego Applegate Edwards at 8:18 AM