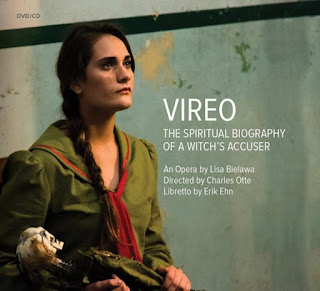 Of Lisa Bielawa's Opera Vireo (Orange Mountain Music 7017 2-CD&DVD) there is much to say. The way it is presented is innovative and very pleasing, and it frames in ideal terms the music, and the libretto by Erik Ehn. Note the subtitle The Spiritual Biography of A Witch's Accuser. The opera centers around the teen-aged young woman Vireo (played and sung beautifully by Rowen Sabala), who is subject to visions that the original French 16th-century socio-cultural setting defines and instantiates as witchcraft possession., and in her world she becomes a witch accuser.

The world of Vireo is in constant flux. There are 12 chapters-scenes in all, and the time fluctuates from 16th Century France to the 19th Century, to the present day and temporal pockets in between. Vireo and in time her fellow accusatory companion Caroline (well sung and played by Emma MacKenzie) are responsible for numerous witch burnings, yet each chapter-scene is a shift in time and place into the present and the mythical past, so a boarding school, a convent, a farm and a dramatically central scene, when both are jailed in Alcatraz.

The details of the scenes and plot are best digested via the DVD Video. The thread of all is Modern-Poetic-Hypersurreality. What is iconic and beautifully unforgettable comes about in part through the centrality of the film of the opera, shot on various sites as a film-music-drama more than a film of the staging. Music, cast, libretto by Ehn, screenplay, design and production by Charles Otte come together with an ever-shifting group of distinguished instrumentalists that includes the Kronos Quartet, the Prism Quartet,  the San Francisco Girl's Chorus, Alarm Will Sound, the American Contemporary Music Ensemble (ACME) and etc. Singing casts and instrumentalists are integrated in each scene into a real-space site so we feel we are (and we are) watching a movie rather than a staging. This too allows for complete visualization of the dramatic time-shifts and dream-like world of the poetic irrational.

The effect of the entire presentation, originally shown on PBS station KCET, is most remarkable, moving, the truly unified "total socio-artistic phenomenon" that melds all elements in a moving, ultra-memorable and unforgettable way.

And happily it serves to underscore the musical excellence of it all as a performance and as a composition. The singing is exceptional, the performances plentifully right, just so, and we have in Vireo a triumph of the new Modernism with the best elements of the old Modernism transformed and reworked anew. Orchestration is seminal, the musical content ever-inventive, and in toto this is one of those breakthroughs that I do believe will be looked back at years ahead as a major new wonder, and that for its content and its presentation. It extends our idea of an opera without skimping on the musical and dramatic elements.

You who seek to be in touch with the new will benefit greatly through experiencing, studying, entering the word of this wonderful work. It is hard to imagine a more riveting leading role than the one done so well by Rowen Sabala. Yet everything is exceptional and that is most rare! And in the end you wonder what it all means, how society creates  frameworks, rather horrible ones most of the time, to accommodate a non-standard perception of the world. It is in the end disturbing, thought provoking. The witch accusers are the real witches, even more the institutions that recognize the defining realty of such things, and yet of course there is no such thing except in the collective consciousness, in our mythical illusions. All are victimized in the end? Yes, and we still suffer. Strongly recommended.
Posted by Grego Applegate Edwards at 9:20 AM