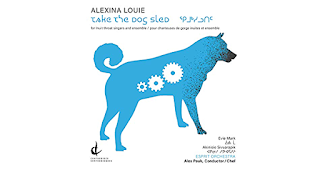 Some music fits a season so well that it seems right to hear it at that point. It is true of  deep winter and the Alexina Louie work for Inuit Throat Singers and Ensemble, Take The Dog Sled (Centrediscs CMCCD 28320).  The performance features seven musicians from the Esprit Orchestra and throat singers Evie Mark and Akinisie Sivuarapik, all under the direction of conductor Alex Pauk.

The work was commissioned by Kent Nagano and the Montreal Symphony Orchestra, completed in 2008 and first performed by the MSO during their tour of Nunavek in far Northern Quebec. After a good number of performances we happily have this worthy recording.

The work centers around an adaptation of traditional Inuit Game Songs, a unique musical pastime for two singers with greatly varying, aurally fascinating duet articulations of pitched throat singing and percussively breathed vocal twists and turns. There is nothing quite like this music in sound quality, the interlocking vocal bursts proceeding with unprecedented timbral depth through close repetitions of short call-and-response phrases.

Take The Dog Sled utilizes Game Song phrasing sung by the two throat singers, countered with a chamber orchestra that takes its musical form in part from Game Song phrasings and adds depictive open tonal passages that in the eight-part whole give a vivid impression of the plasticity of Inuit social and everyday life. It at times seems almost a concerto for throat singers and ensemble, yet it travels beyond that to instrumental tutti that take it all some distance from the short phrased vocals yet are shot through with their influence.

This is music both evocative and fun, seriously expressive yet filled with a joy of gaming in its own way. It is not your expected Modern Chamber fare and so refreshing in its somewhat independant cast. Very recommended.