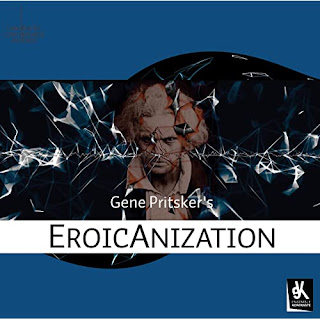 With the music of Gene Pritsker a reliable constant is his brilliant unexpectedness, it seems to me. Last month (December) marked the 250th birthday of Beethoven. Part of the festivities honoring the occasion surely is Gene's album EroicAnization (Composer's Condordance), which selects musical passages from the 3rd Symphony and in one instance "Fur Elise" to rework them extensively into various stylistic exceptionalities.
So for example the opening "Ludwig's Night Out" combines Gene's noteful electric guitar work with electric piano, bass and drums for a Fusion wonderment that makes a very different sense out of Beethoven while retaining Ludwig's melodic edge.

"Eroica Erupted" takes an old recording of the Eroica and electronically manipulates it, while adding a sort of demonically lively Hip Hop for strings, drums, etc. As is the case throughout the album, it is not just what Gene does to the Beethoven lines, it is the how of the transformation, how it works as something unleashed anew.

"Eroica Extracted" makes lyrical ensemble sense out of another passage extracted from a recording and pulled apart as the ensemble puts it back together again differently, happily, contrapuntally engaging it and creating something wholly new amidst hypnotic counterlines that help put it all together.

"Eulogy Eroica" gives us a plaintive and thoughtful chamber ensemble movement, then a nicely engaged song with an expressive vocal in a Modern Contemporary Pop sort of way with an edginess that one might expect from Pritsker.

"Erroneous Eroica" works very productively with the scherzo--an orchestral excerpt as electronic source along with ensemble. It is wonderfully playful, wild and funny, too. Everything works together to conjure surprising variations and hairpin turns away from an expected destination.

"Eka Tala Eroica" gives us a sort of Indianization in ways that intrigue and delight.

Finally "Fur Elise Charleston"--is just what the title suggests. It has that old band 1920s sound and yet it is indeed "Fur Elise" in a lively disguise. Then just as one thinks one knows what is next, up comes rap from the MC! It is funny but brilliant, too.

So we have a homage to the great Ludwig that marks his milestone birthday in ways that are really quite fun and substantive, typically Pritzkerian in that it takes nothing for granted and traces a contemporary Modern set of ties back to dear old Beethoven without a conscious throwback sort of nostalgia. It is someth9ng  stylistically possible only right now, today, and for that matter something nobody else but Gene Pritsker could quite pull off so convincingly. Bravo!

Posted by Grego Applegate Edwards at 8:13 AM