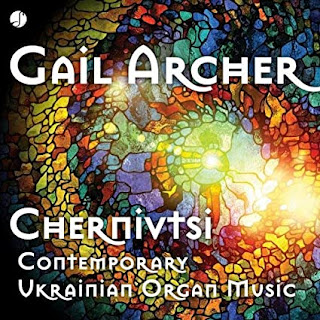 Before the fall of the USSR last century I like many in the States was not very aware of a Ukrainian musical scene per se. Now of course all that has changed and we can follow what is happening there directly.

A nice example has come out recently--Gail Archer's Chernivtsi, Contemporary Ukrainian Organ Music (Swan Studios MM20042). On it some six contemporary composers give us seven works in all.

It follows on the heels of  Ms. Archer's A Russian Journey, Music of the "Russian Five" (see my post on February 13, 2018 for information on that one). Both volumes are the first in a series of albums on the organ music of Eastern Europe. A third album covering Modern Polish Organ Music will be released shortly.

The current recording utilizes the Rieger-Kloss organ in the Armenian Catholic Church in Chernivtsi, Ukraine. It sounds powerful and full, fully appropriate for the very dynamic and detailed symphonic organ music we have the pleasure to hear. Ms. Archer happily was sent numerous relevant scores by her Ukrainian composition and organist colleagues and she chose these excellent examples to illuminate and enlighten us all.

Eastern European minor and chromatic Modern sensibilities dominate with a richness of imagination and dramatic flourish that mark the program out as notable and fascinating to hear in depth.

The album opens with two works by Bohdan Kotyuk (b. 1951), the "Fanfare" especially notable for its use of fourths to build harmonic spatiality. Listen also to the very chromatically full build up on the Mykola Kolessa (1903-2006) "Passacaglia." In contrast there is the end of the program, the firmly minor heritage of "Chacona" by Svitlana Ostrova (b. 1961) and a more extended, more freely unfolding "Fantasie" by Iwan Kryschanowskij (1867-1924).

This is a volume any organ music modernist-appreciator will gravitate towards, plus of course those wishing to explore what is happening organ-wise these days and what was happening a bit earlier in the Ukraine. Gail Archer casts a steady artistic light on the music in winning fashion.