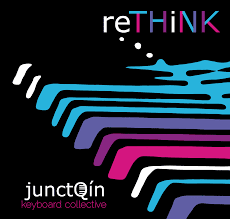 From Canada we have six hands for pianos and what have you, the junctQin keyboard collective to be precise, and their album  reTHINK (Redshift TK479). They are celebrating ten years together with eight Modern works they have identified with and are in turn identified in if you will have it, which I certainly am happy to do by listening repeatedly. They are Elaine Lau, Joseph Ferretti and Stephanie Chua. In combination the works they play range from piano six hands to six hands in the piano, toy pianos, electronic keyboards, and more, all reminding us we live in an aurally extended universe these days, and how that is a good thing.

The works have in common a sense of adventure and a Modern slant. Schnittke's "Hommage a Stravinsky, Prokofiev & Shostakovich" brings out the rhythmic vitality of those composers and their very well developed melodic thrust. Schnittke sounds out that essentiality with some very masterful, stirring music.

Monica Pearce's "Chess Suite" makes lively use of two toy pianos and teases out the pulsative presence of such instruments well played, the beautifully fragile melodic possibilities and her own vital musical imagination.

Ravel's "Frontispice" hails from the end of WWI (1918) and is performed here for piano six hands. though it originally called for two pianos and five hands. I do not recall hearing it, ever, and it is very nice to hear at that--as done so well on this program.

Emily Doolittle's four-handed piano "Sorex (A Celebration of Untamed Shrews)" was inspired by Shakespeare in 2010 and thrives with nicely memorable pianisms throughout.

Tomi Raisanen "Insider" (as alluded to above) is the three mostly playing inside a grand piano. Pure adventure I suppose you could say it is, for it is.

The program ends with an Elisha Denburg piece for piano, toy piano and Casio keyboard. "Welcome to the Warp Zone!" is nearly orchestral in scope. It leaves us with something truly fun, catchy, and "jazzy" if you will.

After all is said and done junctQin leaves us with a good reason why New Music remains a vital thing no matter what else the world may bring. The content is detailed and uniformly musical, the performances are bright and bristling with energy and sensitivity. If you seek something new and unexpected, here is a good one to grab.

Posted by Grego Applegate Edwards at 10:03 AM