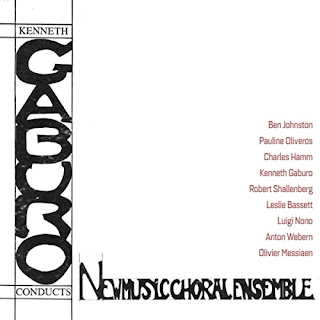 You may well remember American composer Kenneth Gaburo (1926-1993) via his Nonesuch recording of the later '60s and/or perhaps the New World recording from the early 2000s. Now we find there is a rediscovered concert tape from 1967 coming out as a CD, Kenneth Gaburo Conducts New Music Choral Ensemble (Neuma 124).

It turns out that the program and the performances are very good. Two short but worthy Gaburo electro-acoustic works that came out on the Nonesuch LP originally--"The Wasting of Lucrecetzia" (1964) and "Fat Millie's Lament" (1965)--are included here, with the same electroacoustic tapes that made up that part of the LP. They still sound fresh to me.

The rest of the program consists of some High Modern classics and some interesting works not all that well-known at this point. In the latter category are brief works by Charles Hamm, Robert Shallenberg, and Leslie Bassett, all composed in 1966-67. Of great interest though perhaps also not very well known is the fascinatingly atonal Jazz shadings of Ben Johnston on his "Ci-Git-Satie" (1966).

The flowing advanced tonality of Nono's "Sara Dolce Tacere" (1960) and Webern's Op. 2 "Entflieht Auf Leichten Kahnen" (1909) shows the excellent musicianship of the choral ensemble and rings out with the advanced harmonic palette as it was meant to be expressed.

Pauline Oliveros' "Sound Patterns" (1962) was first introduced and made famous in an Odyssey LP at the time. This version is every bit as sturdy but perhaps a slight bit less percussive--so different enough to keep us interested.

The longest (eighteen minutes) and among the most interesting of the works is the Messiaen "Cinq Rechants" (1948). It has the sort of heightened rhythmic clout one might expect of the composer in this period. Gaburo and the New Music Choral Ensemble give this one plenty of energy and precision for a very satisfying conclusion to the program.

In the end there is a nice contrast between the various works. It all makes for a rather bracing portrait of choral Modernism as it stood in 1967.The audio and performance quality makes me glad this is now available some 54 years after it was performed. Listen to this one for sure! Very recommended.

Posted by Grego Applegate Edwards at 8:42 AM