Wang Lu, An Atlas of Time 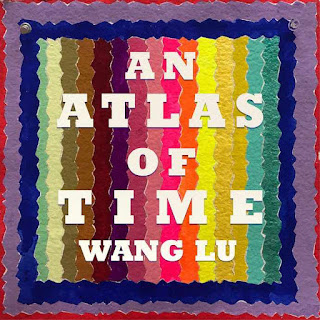 We go through our lives right now, as in any other time, of course, except right now at times for many of us is a kind of limbo brought on by COVID. It has accentuated even more the importance of the virtual and in terms of New Music that means CDs and digital media, naturally. It allows me to keep on, by means of the new albums I am sent in the mail. And then of course with these blogsites I can write reviews while sheltering in place.
Today I write about a recent album, a collection of the music of Wang Lu, whose music I've covered in several anthologies (type her name in the search box above for those). This is my first brush with her music in depth, with an album entitled An Atlas of Time (New Focus Recording FCR 277).
It is a very interesting assortment of Ms. Lu's compositions, two orchestral and three chamber pieces. The music is highly engaging, in a sort of High Modernist mode with an emphasis on extended techniques and heightened sonority.
Ms. Lu hails from China and has been uniquely situated to stand between musical influences East and West.
The title orchestral work "An Atlas of Time" is the centerpiece of the program here, as beautifully performed by the Boston Modern Orchestra Project conducted by Gil Rose. Five movements give us an imaginative, and not necessarily a linear trip though something not as a map per se but more as a  dreamscape. As the promo sheet puts it, her music here and in general is "less about a fusion of styles as it is about tapping into a cartography of her own personal memory and experiences." The music involves a series of found objects often enough, her own musical Proustian madeleines, richly evocative markers of having been in a certain time and place, and then another time and place.
What matters in the end is the living inside the music as a personal event, which as supercharged with personal experiences is never indifferent or coldly abstracted, but engaged and as original as a signature, a series of streams of collided memories that exist together in strikingly extended aural terms.
So the five movements of "An Atlas of Time" juxtaposes the experiential contrasts of the anthem of the Internationale, a children's radio show theme, bells of many sizes and experiences, Gesualdo, the fulfillment of a gestural and storytelling role much deeper than mere nostalgia. It is a fascinating work that bears up under scrutiny. Similarly the concluding "Siren Song" (for a small chamber orchestra of ten musicians) holds forth by musically extending a transliteration of an ancient dialect of the town of Xi'an,  Lu's home region of China.
The three chamber works are of their own special interest, whether it is the "Ryan and Dan" work for the sax of Ryan Muncy and the electric guitar of Dan Lippel, the string quartet "Double Trance" and the vivid coloration of "Unbreathable Colors" for the solo violin of Miranda Cuckson. Everything bears a marked stamp of personal reference and inspiration.
Put it all together and you hear some uniquely wonderful Wang Lu, undoubtedly on the basis of this program one of the most important and accomplished composers working today. Strongly recommended.
Posted by Grego Applegate Edwards at 6:50 AM