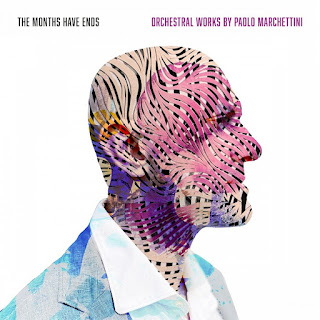 Nobody doubts that we live in tumultuous times these days. How can I keep on writing about music when the world seems bound for hell in a handbasket? We need music now as much as ever, I would answer. It is what can heal us and allow us to go forward again. And so I keep on.

Today I am enjoying another new one and another new artist to me, a composer by the name of Paulo Marchettini. There is a worthwhile disk devoted to his orchestral works just coming out. It is named after one of the pieces, The Months Have Ends (New Focus Recordings FCR280).

The five works presented in this debut album have a great deal of gravitas, a seriousness of purpose and a dramatic richness that thrives within a balanced poise of expression.

Marchettini hails from Rome and currently makes his home in Manhattan. Interestingly he cites as influences Verdi, Frescobaldi and Morricone. The influences happily are realized obliquely in that the music itself stands on its own as a lyrical-tonal Modern Expressionism of an original sort.

A high point is the six movement "The Months Have Ends," an alternately reflective and brashly animated score for soprano Alda Caiello and Orchestra della Toscana. It is based on Emily Dickinson.

The seven movement "Concertino" features the composer on clarinet and the MSM Chamber Orchestra for a nicely wrought, wiry romp that sings out boldly and features beautifully intertwined clarinet-orchestral interactions.

"Notturno" is alternatingly a deeply mysterious and agitated descriptive work that shows us an eloquence that is far from the ordinary today.

The entire program is noteworthy and well performed.