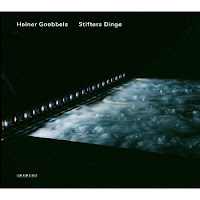 The recording today does not fit in easily with expections. Heiner Goebbels for his Stifters Dinge (ECM New Series B0016967-02) had five grand pianos mounted together on end, and pulled through a number of pools of water while digital devices activated the strings like a set of player pianos. Then through various other mechanical means unconventional sounds from inside and outside the instruments were obtained. Prerecorded voices of New Guinea tribesmen, William Burroughs, Malcolm X, Levi-Strauss, etc., further combine with natural and what sound like electronic alterations of natural-industrial sounds (but are most likely piano-mechanical based).

There are original music vignettes that the composer produced as well as quotations from other works (such as Bach's Italian concerto).

The work is named after writer Adalbert Stifter (1805-1868) who compiled a comprehensive catalog of natural sounds.

The ultimate effect is a rather uncanny combination of text-sound piece, collage, soundscape, electro-acoustic melange and work for five mechanical pianos. No one category makes sense of it, except perhaps music-sound-site installation, which has a rather inelegant ring to it.

What is uncanny about it is the strong feeling that all elements come together to create a kind of sound poem whose meaning does not seem able to be expressed, yet rather clearly lurks below verbal articulation. Regular machine-like industrial, natural, and human (voice and music) sounds combine in a landscape that divides into more or less discrete event horizons, yet does not signify in any conventional sense.

The overall effect is of a narrative in sound, an excursion into abstract hermeticism, a journey to an unknown zone.

It is, ultimately, haunting and original, alien yet accommodating, an aural puzzle that does not easily give up the key to its solution, if at all.

It will in this way puzzle the listener, enthrall, provide a total immersion, a total aural conundrum. And of course that will either satisfy and intrigue, or, if you do not surrender to it, frustrate expectations and confuse. For me the former prevailed.

In that it makes for the best sort of "new" listening experience.