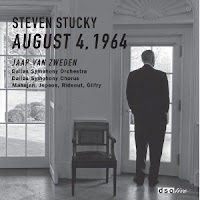 The use of recent history as the subject matter for vocal works has continued since the days of Nixon in China. The latest, first performed in honor of the 100th anniversary of the Dallas Symphony Orchestra, is August 4, 1964 (DSO Live 4).

The music is by Steven Stucky; libretto by Gene Scheer. The Dallas Symphony Orchestra and Chorus, with soloists, is conducted by Jaap van Zweden.

This is not an opera--there is no staging. They instead call it a concert drama, which fits.

It is all about a fateful day in the presidency of Lyndon Baines Johnson (August 4th, 1964). The drama centers around the unfolding of incidents that serve to dramatize Johnson's tenure as a whole. Specifically it covers from the perspective of the White House the ambiguously flawed communications and radar malfunctions that lead to the Gulf of Tonkin incident--the American bombing of the North Vietnamese in response to an attack that never took place. At the same time a series of civil rights crimes--racist murders--came to light in the south, Johnson met with cabinet members on his War on Poverty, and, to add some reflection, Johnson mused on his place in future history and the war, the latter of which come from sources not directly tied in with that day.

The libretto is made up of transcripts of communications from that day, Johnson's autobiographical musings, along with additional dramatized excerpts from various sources by those involved, a related poem, etc.

It is a full-fledged treatment with full orchestra, chorus and soloists, with action, an orchestral interlude and meditative soliloquies on the mostly tragic events of the day. It shows LBJ as a complex, flawed character, a man with a large ego, wanting to do good, to do the right thing, ever aware of the judgement of posterity, never quite able to grasp the full impact of his Vietnamese commitment until it was far along and too late to turn away from. This is LBJ the full supporter of equality and the fight for civil rights, a champion of the poor, yet primarily remembered for his Vietnamese miscalculations. By default, this day stands out as the bungled beginning of the Vietnamese escalation, a response to a nonexistent attack.

The music and libretto combine to capture the tragedy of the era, LBJ's spotty legacy, his human frailties. It is musically effective--moody and frenetic in turns. Given the subject matter, it does not have a great deal of hoopla built into the score--no grand night of toasts as with Nixon in China. The chorus does not function so much as a crowd as a Greek chorus, commenting and interjecting, expressing a mood.

It is not a work that has a great deal of crowd-pleasing, entertaining huzzas. But the theme of that day sets the tone and it would be out of character for these sorts of things to be dropped in willy nilly. These were extraordinarily difficult times to be president and the tone of the work tries to capture that feeling.

The performers under van Zweden acquit themselves quite well. Stucky creates music that well-fits the moments portrayed. I found it all tragically moving. Those were times of great struggle and sacrifice, in some cases for causes that remain with us very much, in other cases for objectives that turned out to be outmoded in time, out of our grasp, out of reach, a flight after a chimera with tragic consequences. A sad time, a stirring time, and a musical drama that captures both, and the larger-than-life persona of LBJ, himself center stage, the central tragic figure of the action that day.

This may not be the masterpiece musical drama of the century, but it deserves your serious attention.