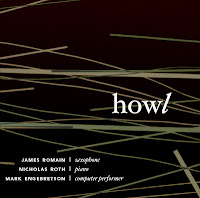 Modern music for virtuoso sax (soprano, alto, tenor and baritone), piano and computer is what you get on Howl (Innova 811).

It's a series of short and multi-movement compositions featuring James Romain as new music/classical sax presence along with Nicholas Roth at the piano and Mark Engebretson as live computer performer. Each work is different enough that variety reigns. The works are by William Dougherty, Jianjun He, Eric McIntyre, and Engebretson, who contributes two short pieces.

The emphasis is for the most part on the new music aspect of what is possible, less on jazz affinities, though there are some to be found (Anthony Braxton's example is somewhere lurking in the wings at times).

Romain sounds very good, some pieces show a healthy experimentation, the use of electronics gives many of the works a broader palette than one would expect from a chamber ensemble, but for whatever reason (and I cannot pin it down) the sax-piano and sax-piano-computer music tended to engage me more than the passages with computer and sax alone. That's a personal issue perhaps and it has nothing to do with my opinion of the use of computers and electronics, as an even casual perusal of my blogs makes clear.

None of it is dull. No one work jumps out as a masterpiece either. It is a definite feather in James Romain's cap.

Posted by Grego Applegate Edwards at 4:20 AM