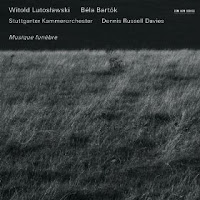 A pairing of Witold Lutoslawski and Bela Bartok isn't a big stretch. After all, they were both Eastern European, both lived and worked in the 20th century, each in their own way were modern innovators, and Bartok was a major influence on Lutoslawski. But it works especially if the program leads off with "Musique Funebre," written by Lutoslawski to commemorate the 10th anniversary of Bartok's death.

And so we have the program to consider today, a CD named after the Lutoslawski work, Musique Funebre (ECM New Series B0016957-02), performed by the Stuttgarter Kammerorchester and the Hungarian Radio Children's Choir, Dennis Russell Davies conducting.

The press sheet that came with this disk notes that "Musique Funebre," a UNESCO Prize-winner in 1959, marks the achievement of Lutoslawski's musical maturity, and that it bears a genetic relationship to Bartok's "Music for Strings, Percussion and Celeste." I concur; one can hear the resemblance. Davies' version brings out the mournful qualities with a low-key flourish and sets us up for the mood change that follows.

Bartok's reworking of Transylvanian folk materials, "Romanian Folk Dances" bring us closer to the earth. The arrangement for string orchestra by Arthur Willner makes for lively and enlivening fare, especially in the hands of Davies.

Bartok's "Divertimento" BB 118 takes us into a realm related to "Musique Funebre," with serious and somber eloquence, but then a final movement that has a folk-dance quality.

The seven pieces from "27 Two-and Three-Part Choruses" BB 111 adds the Hungarian Radio Children's Choir for more folk-based brilliance. These are lovely, somewhat neglected songs and the performances are nothing short of wonderful!

So there you have it--a kind of alternation between the somber and the earthy, the question of influences, some somewhat unstandard juxtapositions and an excellent series of performances by Dennis Russel Davies and the Stuttgarter Kammerorchester.

It's a good bet that if you read this column regularly that you will appreciate the disk.

Posted by Grego Applegate Edwards at 4:47 AM