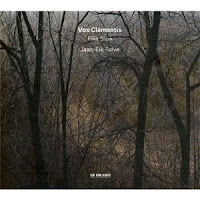 The repertoire from the middle ages and beyond, known generally as "early music," lives and breathes today in renewed glory thanks to a series of dedicated and talented practitioners and a creative sympathy with the music as reflected in a stripping away of the veneer of succeeding ages in modern performance practices.

To put it another way, 100 years of innovation and experimentation in sound color (both acoustic and electronic) has enabled us to rehear early music in ways that paradoxically come closer perhaps to the original context yet also resonate with modern music as it has come to fruition in the past several decades.

That is most certainly true of the Estonian vocal group Vox Clamatis under director Jean-Eik Tulve. They divide their performance time between contemporary avant-early composers such as Arvo Part and the early repertoire itself.

It is to the latter they turn on the new release Filia Sion (ECM New Series B0016956-02). The ensemble sees a special focus, a more intensive blend of vocal sound and color as primary to their mission. The repertoire of Gregorian monophonic chant, drone-centered conductus and early polyphony are uniquely suited to their musical sense, and vice versa.

The theme of the works center around the Daughter of Zion, Mary in the middle-age New Testament derived view. Some beautiful Gregorian Chant, a Perotin conductus (with added overtone throat singing!) various rather obscurely anonymous or lesser-known post-Gregorian works and a Jewish chant make up the program, which is sonically archaic in the best sense.

It's an album that revels in the sort of musical space that ECM has continually excelled at--a cavernous cathedral ambiance, the vocal parts blended with creatively affective attention to sound staging, and a marvelous vocal ensemble sound.

This is music to take you to another spacetime. The taking you there paradoxically has become one of the hallmarks of later modernity, both in performance and new composition.

The excellence of the ensemble and of the recording recommends itself to all who appreciate the sonics of early music. It's continually there on this one, with beautiful results.