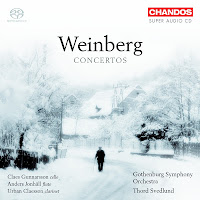 A hot Monday morning in the season and we return to the corpus of Mieczyslaw Weinberg's works for a fine disk of Concertos (Chandos). Thord Svedlund conducts the Gothenberg Symphony Orchestra for a notable grouping of four: the "Fantasia," op. 52 (for cello and orchestra), Flute Concerto No 1, op. 75. and No. 2, op 148, and finally the Clarinet Concerto, op. 104.

These are four works that stand on their own. The "Fantasia" has some extraordinarily memorable melodic work in the cello, well played by Claes Gunnarsson.

The second Flute Concerto is modern sounding in Weinberg's own way, which in this later period shows a synthesis between the general Russian modern milieu and his own originality. There are bittersweet flute passage of beauty and Anders Jonhall brings out his part with a projecting presence and fine tone.

The first flute concerto begins with a rather frenetic romp at breakneck pace, follows with an evocative slow movement and a dance-like finale. It's perhaps a bit more whimsical than the second and that gives the music some welcome contrast.

The Clarinet Concerto has a very bravura clarinet part and a bit more dash and stridency than the other works. Urban Claesson heightens the built-in contrasts and handles the various articulations with poetic grace.

Svedlund and the Gottenburg Symphony sound very much in sympathy with the music and give it all the proper flourish. The soloists are top notch and the music is first rate Weinberg,