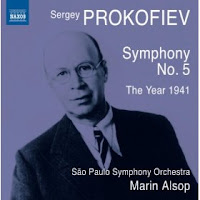 Why is it that the two masterpiece symphonies from WWII were both written by Russians? I refer to Shostakovich's Symphony No. 7 and Prokofiev's Symphony No. 5, the latter in a new recording by Marin Alsop and the Sao Paulo Symphony Orchestra (Naxos 8.573029).

There is no easy explanation, I suppose. We musn't forget how devastating was the Nazi invasion of Russia during the war. USSR soldiers gave their lives in huge numbers to repulse Hitler. The turning point of the war was most certainly centered around Hitler's strategic disaster. With the two-front war the Nazi's were doomed. And the Russians fought back with relentless will and courage.

That still doesn't account for the magnificence of the symphonies. Of course Shostakovich and Prokofiev were at the prime of their creative powers, symphonists of marked originality, and the allied world needed (hard to imagine in today's cultural climate) symphonies of great, stirring power to rally around and to celebrate a musical analog of events. They most certainly got them.

The fact is, masterpieces are masterpieces; they arise in circumstances that can be as variable as anything in life. Be that as it may, these remarks came to mind as I listened to Marin Alsop's vivid new recording of the 5th.

It is a symphony of unforgettable melodic brilliance, harrowing and triumphant, powerful and tender, transcendent. It was conceived at a peak moment, 1944, when the tide had turned, and it captures the horror and brutality of the war and the joy of impending victory.

Ms. Alsop conducts the Sao Paulo Symphony Orchestra with great elan. The broad sweep of singular themes, great drama, melancholy regret, stirring action, all are rendered with the attention to affect so necessary to do justice to this symphony's great power to move listeners. If I occasionally found that the balance of parts in the recording was not quite what I was used to hearing (I have a number of old LPs of this symphony)--the snare drum part in the fourth movement is felt as much as experienced, sometimes the secondary wind or string parts don't seem as forward in the mix as what I have heard--it is partially because the soundstage is closer in ambiance to an actual concert performance, that perhaps there was less in the way of close, multi-miking going on than in the classic high fidelity days.

At any rate this is a version to turn to again and again with delight. It's very spirited and triumphant. And the inclusion of Prokofiev's moving Symphonic Suite "The Year 1941" makes this a great choice, especially at the Naxos price. This is a symphony that grows in stature the more one hears it. A near-lifetime of listening to it convinces me that it belongs with the greatest symphonies of the past century. Do not hesitate to grab this disk--even if you already have a recording of the work.