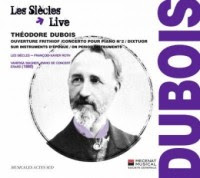 Theodore Dubois (1837-1924) may not be familiar to many. He left behind a rather considerable body of works and was a prominent pedagogue in his day, teaching Dukas and Schmitt, among others.

Les Siecles under Francois-Xavier Roth has recorded a disk of Dubois orchestral works (Musicales Actes Sud) including his Second Piano Concerto, the Ouverture de Frithiof, and Dixtuor, a four-movement work.

It reveals a vigorous (late) romantic with a thematic developmental prowess (in "Dixtuor" especially) that appears now and again at various points throughout the program.

The Piano Concerto is well-crafted but perhaps not entirely overwhelming in its impact. It is well played by Vanessa Wagner as soloist. The "Overture" and "Dixtuor" have the most to offer to my ears.

Les Siecles does a fine job, particularly in that this is a live recording. At this point I would have to say that the disk will appeal to the more die-hard of romantic aficionados. Others may find it less indispensible.