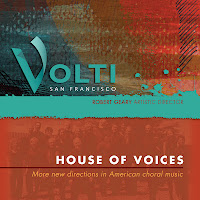 Volti is a choral group from San Francisco devoted to the contemporary muse. They are under the capable direction of Robert Geary. Their latest disk, House of Voices (Innova 834) offers six compositions in what one might call "new form tonal" American music, five of which were specially commissioned by the group.

I've said this before but it still applies: the voice in the form of the choral ensemble affects our inner ear in interesting ways. Perhaps because we are neurologically-psychologically wired to respond to the human voice, choral music gets our primal attention. Simple to moderately complex melody and harmonic sequences, when sung with the expressive focus of a good choral ensemble, have a heightened affect it seems, more so than an instrumental group might have playing the same music.

The point is that good choral music should probably be approached differently compositionally than pure orchestral or chamber instrumental music. Perhaps that is a commonplace in composition classes. But that may explain why some scat singing by less than perfect jazz singers can fail utterly. To try and approximate instrumental style and content with the voice needs absolute perfection to come across to the listener with credibility. So for example an excellent Indian classical vocalist spends many years perfecting his or her art--so that he or she can rival classical instrumentalists in complexity of phrasing and execution. The same could be said of bel canto opera soloists. If they aren't totally great, it doesn't work.

That's not to say that Volti are less than terrific. They are excellent. But the compositions represented on this disk operate in a folk-choral-multi-part universe that is new by virtue of its treatment of familiar melodic-harmonic forms. Each composer, it is clear, has internalized the choral tradition at its best and done something new with it.

So we get six fairly short works all written in this past decade--by Yu-Hui Chang, Ted Hearne, Donald Crockett, Eric Moe, Wayne Peterson, Mark Winges, not exactly household names at this point but all capable of turning out interesting choral work, all getting sensitive and excellently executed performances at the hands of Volti.

Each composition in its own way emphasizes vertical-horizontal phraseology that sounds well in the choral context. Some of it is ravishing. All of it is a testament to the excellence of the Volti ensemble. The music has a direct, straightforwardly aesthetic quality that should be accessible to a larger-than-usual audience for new music. So bravo, then!