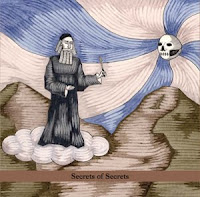 Aaron Novik writes a kind of new music that partakes of prog rock, avant jazz and Yiddish-Jewish folk tradition in very captivating ways on his newly released composition cycle Secrets of Secrets (Tzadik 8168). It is a musical counterpart to the writings of Eleazar Rokeach, a Rabbi of Wurms of the 12th Century, who left behind for us a five volume treatise on ethics and mysticism known as Secrets of Secrets. Each of the five works by Novik gives musical sound to a particular book from Rokeach's opus.

The instrumentation is quite effective in putting across the electric-acoustic musical ideas of the cycle. There's a kind of electric-acoustic nucleus of Fred Frith, avant electric guitarist of repute, Aaron Novik on electric clarinet, percussion and programming, Carla Kihlstedt on electric violin, plus drums, bass clarinet, and more percussion. Then there are the "guests": Ben Goldberg on contra-alto clarinet and clarinet, Lisa Mezzakappa, bass, and one Aaron Kierbel on dumbek. Augmenting the forces are a string quartet and a brass quartet.

The music itself is an amalgam of avant collage, insistent rock-jazz-minimalist repetition at times, Jewish minor tonality, klezmer-style and jazz-style improvisation, and compositional evocations of great originality.

Beyond that it is music that should be heard more than described, because it is tabula rasa in many ways. The music is masterful, haunting and serious on multiple levels. Aaron Novik creates a musical universe all his own. If King Crimson's Lizard was rewritten as a modern classical piece, then adopted to Jewish middle-ages and early 20th century Yiddish performance over time, then cast forward into the space age of the future for further modification, transformation and refinement, one might get a result that would sound something like this. But no, this is Aaron Novik's doing, his vision of the vision of Eleazar Rokeach.

It is one of those compositional cycles/performances that once you hear it a few times it is not easily forgotten. Nor should it be. A masterful work you should make a point of hearing.

Posted by Grego Applegate Edwards at 4:33 AM