Andy Akiho, No One to Know One 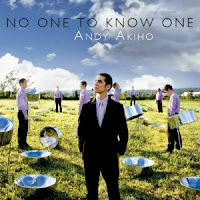 Andy Akiho is a virtuoso of the steel pan, the instrument constructed from the top of an oil drum, that originated in the Caribbean and spread to the diaspora. He also composes music. Put together his playing with ensembles of varying size doing his compositions, and what you have is his album No One to Know One (Innova 801).

The best phrase I can think of to describe the music might be "composed fusion." Most of the pieces have a rock-oriented rhythm section of drum set and either contrabass or electric bass. Several string players and/or winds, and sometimes harp, piano and/or vibes augment the group.

Andy varies the sound of the steel pan when it suits him to do so by preparing it with different materials or playing it with chopsticks.

The result is a program of rock-minimal-oriented pieces that are quite tonal and accessible. I suppose "light modern classical" might sometimes be applied to the music, except it's not always really classical, and the lightness comes out of those times when pop-rock motives are adapted. Other times it's complex modern minimalist music. Any given piece most of the time would not sound out of place as part of a soundtrack. Nor would they be out of place in a college radio programming situation.

But even if that were to be the case the timbre of the steel pan and Andy Akiho's vibrant style in the fusion rhythmic context would make this music stand out from the rest of the fare.

Posted by Grego Applegate Edwards at 4:20 AM